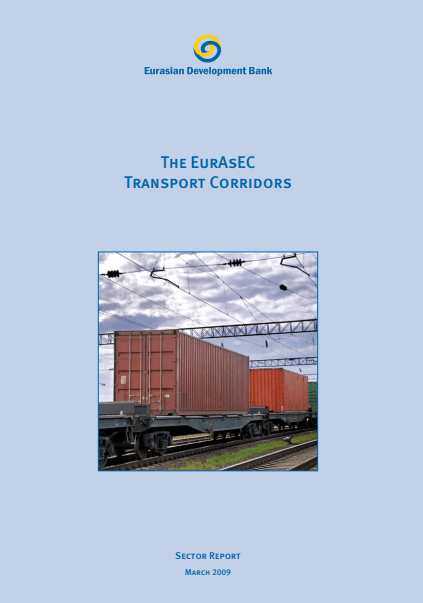 Transport is at the heart of an efficiently functioning economy, since it provides an infrastructural basis for sustainable development. In modern times, when individual economies are joining together to form a global production network, access to efficient transportation and communications systems is an essential precondition for integrating into this network (Lakshmanan, 2001).

For EurAsEC members – Belarus, Kazakhstan, Kyrgyzstan, Russia and Tajikistan – whose mutual trade turnover and, accordingly, cargo transportation have been rapidly increasing recently (by 2020, their cargo transportation may total 490 million tonnes, a four-fold increase compared with 2000), the development of transport infrastructure is vital in sustaining the rapid expansion of mutual trade and economic integration.

Today, analysts estimate the transit potential of EurAsEC at around 220 million tonnes. By 2020, this may increase to 400 million tonnes, with about 290 million tonnes of cargo potentially being transported from EurAsEC to third countries. In order to be able to handle these enormous volumes of cargo, the region’s existing transport infrastructure needs to be modernised.

However, EurAsEC does not fully utilise its transit capacity, handling only half of its potential cargo flow. The main reason for this is its failure to become a key transit route between the two global commodity-producing centres, the EU and the APR. Trade turnover between these regions will reach $1 trillion in the next few years. Only 1% of the cargo generated is being transported via the ITCs of EurAsEC. In this paper, we will attempt to identify measures that need to be taken to make the region’s ITCs a realistic source of transit revenue for EurAsEC countries.

The purpose of this review is to provide an insight into the diverse problems associated with transit via EurAsEC. Firstly we examine competition in the transit transportation industry and the structure of competitive advantage in sea and land freight transit. Secondly, we identify specific cargoes which can be transported via the ITCs of EurAsEC. Thirdly, we analyse physical and non-physical barriers to the realisation of the region’s transit potential, and propose measures to eliminate these barriers. We also discuss various potential targets for investment and the progress of transport integration in EurAsEC. Finally, we provide detailed information on existing and emerging ITCs in EurAsEC countries, and highlight the most promising and efficient ITCs which are already helping the region to achieve its transit potential and further the integration of EurAsEC countries.