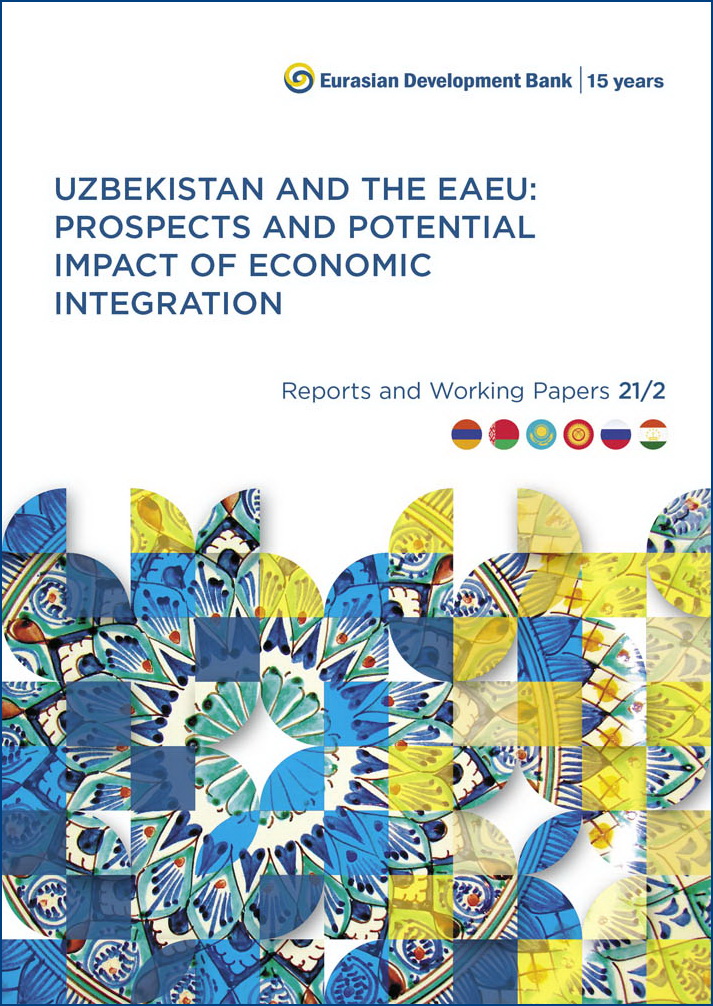 Uzbekistan and the EAEU: Prospects and Potential Impact of Economic Integration

The Eurasian Development Bank (EDB) has published a report titled Uzbekistan and the EAEU: Prospects and Potential Impact of Economic Integration.

The report estimates the potential effects of Uzbekistan’s integration with the EAEU and outlines promising areas for cooperation between the current Union member states and Uzbekistan.

Uzbekistan is a large Central Asian (CA) economy with a GDP of USD 57.7 billion and a population of 34.6 million (2020). The country is rich in natural resources, and has a well-developed production base. In dollar terms, Uzbekistan’s GDP is equivalent to slightly more than 3% of the aggregate EAEU GDP, and comparable to the Belarusian GDP.

In 2011–2019, Uzbekistan’s economy grew at an average rate of 6.6%. This is higher than reported by the EAEU member countries. Despite the vigorous economic growth, the income gap between Uzbekistan and the EAEU member countries remains significant. One of the reasons for the income gap is the low productivity of various sectors of the national economy.

The structural changes and economic reforms initiated in 2017 by Uzbekistan’s government are visibly transforming the economy. However, the country still needs to promote infrastructural development, improved access to global and regional markets, and a favourable institutional environment. The authors believe that economic and institutional support that would result from integration with the EAEU should foster Uzbekistan’s comprehensive development.

What economic effects could Uzbekistan reap from integration?

EDB analysts estimate that infrastructure investments from the EAEU in Uzbekistan could reach as much as $1–1.5 billion annually. This would add 0.3-0.4 p.p. to real GDP growth per year. Bank experts believe that Uzbekistan is an attractive business and FDI destination for the current EAEU member states. Companies from EAEU countries are interested in building up cooperation with the country’s enterprises.

Access to the common EAEU labour market would generate additional remittances to Uzbekistan at an average of $1.5-2 billion per year. The authors estimate that this should add 0.3–0.4 p.p. to annual real GDP growth. In addition, labour migration to EAEU member states should help to mitigate socio-economic tensions in the country caused by unemployment and underemployment.

Another significant benefit from deeper integration for Uzbekistan is the possibility to boost exports to the current EAEU member states by an additional $1.2 billion. By comparison, in 2020 the country’s exports to the EAEU totalled $3 billion. Increased supply by Uzbekistan’s exporters is possible not only to Russia as the key trading partner but to all EDB member countries.

As for the current EAEU member states, their full integration with Uzbekistan should also stimulate exports to its large consumer market. EDB analysts estimate the unrealised potential of EAEU exports to Uzbekistan at $1.6 billion.

Another advantage of the EAEU member states’ economic integration with Uzbekistan should be access to its labour resources and raw materials. This is expected to foster economic cooperation within the EAEU.

The authors also believe that facilitating access to the EAEU labour market for migrant workers from Uzbekistan should help offset labour shortages in the Union in several sectors. At the same time, Uzbekistan’s possible accession to the EAEU will enhance competition among migrant workers from Armenia, the Kyrgyz Republic, and Tajikistan, among other things, in consequence of the numerical superiority of migrants from Uzbekistan.

“It would be difficult to facilitate an efficient regional development without Uzbekistan, which is a major and strategically located player in Central Asia,” comments Evgeny Vinokurov, EDB and EFSD Chief Economist. “This fully relates to the transport, logistics, and the water and energy complex. The depth and intensity of Uzbekistan’s engagement in regional and Eurasian integration processes will determine their sustainability and success. Uzbekistan’s greater economic integration with the EAEU could significantly boost economic cooperation in the region.”

The report concludes that sustainable long-term economic development of the EAEU will depend on the advancement of trade and economic ties among the region’s countries based on effective projects (production facilities). Such projects need to be globally competitive. Development of the integration association should not pursue “expansion for the sake of expansion”. That path will ultimately impair the efficiency of the regional organisation.

The full version of the report Uzbekistan and the EAEU: Prospects and Potential Impact of Economic Integration is available at the EDB website.