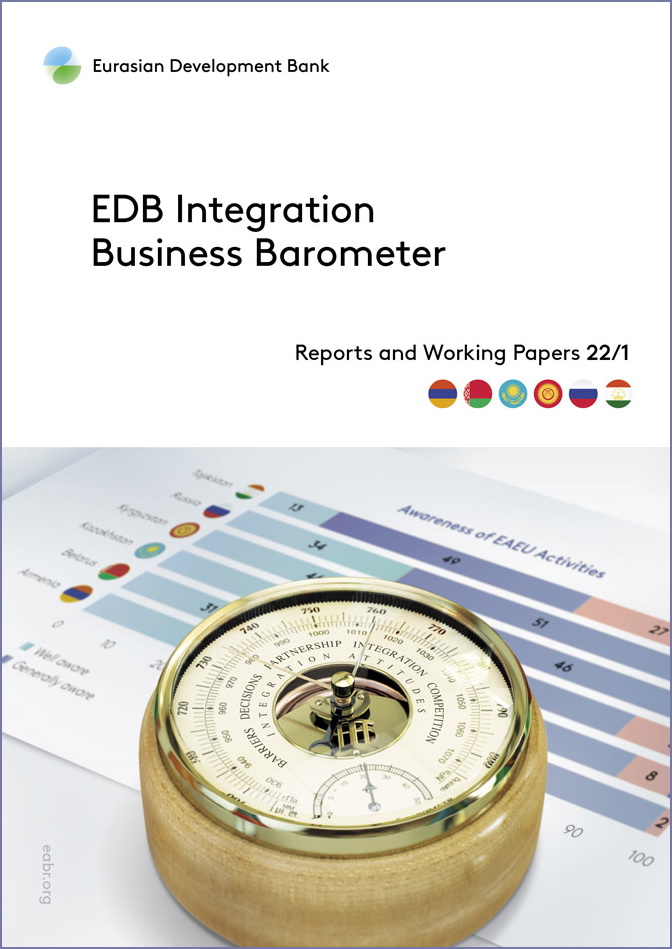 The Eurasian Development Bank (EDB) presents the results of its survey of large- and medium-sized companies from Armenia, Belarus, Kazakhstan, the Kyrgyz Republic, Russia, and Tajikistan that conduct foreign trade in the EAEU and CIS. The EDB Integration Business Barometer is a project launched by the EDB Centre for Integration Studies and the Eurasian Monitor International Non-profit Association of Research Agencies. The surveys of 337 companies conducted in August and September 2021 were intended to monitor the extent of their awareness about Eurasian integration, their attitudes to the existing barriers and support in foreign trade operations, as well as their views of integration and cooperation priorities in the EDB region of operations.

Most of the companies that took part in the surveys (73% on average) believe that Eurasian integration makes it easier to do business in the EAEU, significantly or to some extent according to 79% and 78% of respondents in Kazakhstan and Belarus, respectively, 75% each in Russia and Armenia, and 60% in the Kyrgyz Republic. Notably, no companies in Belarus and Kazakhstan reported that the EAEU complicates the doing of business. Respondents in Russia, compared to other countries, found it more difficult to answer this question. As an experiment, the questions about the EAEU were also asked in Tajikistan, where 73% of respondents said that the EAEU facilitated doing business in its member countries to some extent, while some noted they would like to see Tajikistan as a member of the Union.

However, companies from all the six countries face barriers to trade in the EAEU and the CIS region. In addition to technical (labelling, certification, etc.), customs clearance, and sanitary compliance difficulties, the respondents most frequently mentioned: 1) high competition; 2) lack of information on foreign markets and potential partners; 3) sales restrictions; and 4) financial constraints (foreign exchange controls, regulations for payments or for obtaining and using loans to finance imports). The least common are difficulties with export subsidies, protection of intellectual property rights, public procurement restrictions, and price controls on competition. Companies also mentioned other difficulties they face in the EAEU (Figure 1).

Figure 1. Difficulties faced when doing business in the EAEU (% of respondents who mentioned the respective concerns)

The risk of high competition most often arises when companies deal with Russian companies, while the latter note they face this risk when working with Belarusian and Kazakhstani ones. Respondents from Tajikistan and the Kyrgyz Republic also said they faced the risk of competition when working with Kazakhstani companies. As for the difficulties with customs clearance, sanitary compliance, technical barriers, and the lack of necessary information, the survey has provided almost the same country breakdown. Finally, companies from the six countries named other barriers they face in the CIS region (Figure 2).

Figure 2. Obstacles to Foreign Trade with Countries in the CIS Region (% of respondents)

The possible measures to lift barriers as suggested by companies include the use of international standards or the development of companies’ standards and EAEU regulations (the most frequent response from companies in Armenia); mutual recognition of product evaluation procedures (the most frequent response in the Kyrgyz Republic); harmonisation of labelling rules and regulations (the most frequent in Kazakhstan); and the development of unified trade requirements and rules (most frequently proposed by Russian companies). When asked about how the EAEU could improve its efficiency, companies answered that the opinions of the private sector should be taken into account, common standards should be developed, and rapid response services in foreign trade should be set up. Some respondents believe it would be useful to have more meetings and forums. Companies also mentioned the need to include more countries in the EAEU.

Among the measures adopted within the EAEU, the most welcome are those relating to digital transformation. These are considered most effective by companies from Kazakhstan and the Kyrgyz Republic, slightly less so in Belarus, and least effective in Armenia and Russia. The measure that is appreciated the most by respondents from all the countries is the implementation of the EAEU digital agenda, which has been assessed positively by 71% of companies in Armenia, 73% in Belarus, 83% in Kazakhstan, and 65% in Russia. The most welcome measure for companies in the Kyrgyz Republic (83% of responses) is the one-stop-shop mechanism, while 77% of respondents also welcomed the digital agenda.

Among the solutions adopted within the EAEU to support companies, reducing the tax burden works best for most companies, while the worst is the introduction of special treatment for investors from the member states, with a free choice to use national treatment or most-favoured-nation treatment in each EAEU country. Companies also welcome deferrals of indirect taxes for up to 50 days and equal employment opportunities for citizens of each EAEU member state. Respondents also noted the most attractive and desirable benefits and incentives for companies in the EAEU, including preferential lending terms and tax and customs exemptions.

The survey has found that awareness of the EAEU among companies in the six countries averages 85% (Figure 3). The highest levels of awareness are in Armenia and the Kyrgyz Republic (where 98% and 92% of the respondents, respectively, answered they were “well aware” or “generally aware” of the EAEU), as well as in Kazakhstan (84%). Companies in Russia and Belarus have almost the same level of awareness of the EAEU and its activity – a third of the companies surveyed are well aware and just over a half are generally aware of the Union. Tajikistan, which is not a member of the Union, has the lowest awareness among companies – a third of respondents are poorly aware of the EAEU, while another 11% said that they had never heard of it before.

Figure 3. Awareness of the EAEU and its activities among companies (% of respondents)

In Kazakhstan and Russia, 29% and 25% of companies, respectively, indicated they had received support from the EAEU and its institutions (Figure 4), in particular advisory services and assistance in solving issues. Among the types of assistance received, companies noted information assistance, support with export formalities, and the opportunity to participate in training sessions.

Figure 4. Support received by companies from EAEU institutions (% of respondents)

More than 50% of companies surveyed in all the countries know about the EAEU free trade areas (FTAs) with other countries. Respondents from Kazakhstan are the most informed, while the awareness among Russian and Belarusian companies is similar – 15% are well aware, just over a half are generally aware, and 30% are unaware of FTAs. In Armenia and the Kyrgyz Republic, 43% of companies are unaware of EAEU FTAs. However, companies are interested in new EAEU FTAs, primarily with China, Turkey, Uzbekistan, and EU countries (especially Germany and Poland), as well as with Ukraine, India, and the United Arab Emirates.

You can also view the report EDB Integration Business Barometer at the EDB website.