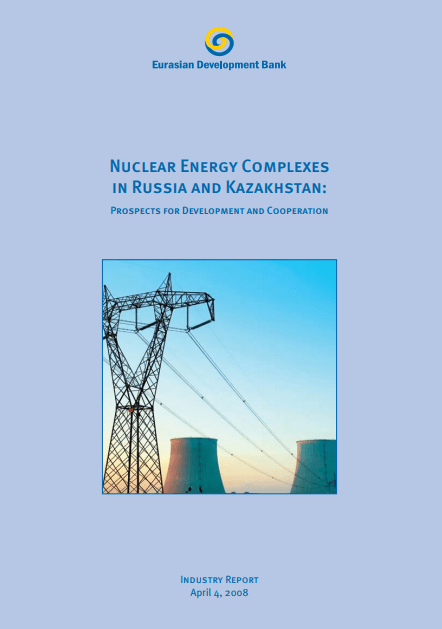 Nuclear Energy Complexes in Russia and Kazakhstan: Prospects for Development and Cooperation

1. 2005–2006 was a critical period in the development of the nuclear complexes of Russian Federation and the Republic of Kazakhstan. These years have ushered in a “nuclear renaissance”. Russia’s nuclear sector was subject to a total systemic review; the Federal Target Program (FTP) allocated to it funds totaling more than USD 55 billion. A decision was taken to consolidate all nuclear assets within one state corporation. Kazakhstan implemented the “15000 tons uranium by 2010” state development program. Its development programs for reactors and nuclear power plants are worked out jointly with Russia. Closer cooperation is also being pursued with other leaders in the field, primarily Japanese companies. Cooperation agreements between the two countries were adopted. The foundation of three joint ventures (JV) was the first tangible outcome of above agreements.

2. Meanwhile Kazakh uranium has become a focus of attention and fierce competition between the world’s largest consumers, including France, Canada, USA, Japan, China, South Korea, and Russia. Early this decade, Russia’s substantial production capacity and highly competitive uranium ore conversion technologies added to calls for the country to renew its economic links with Kazakhstan in the uranium mining and nuclear industries. Given Russia’s ambitious plans to develop nuclear energy, and the fact that its uranium stocks are practically depleted, the benefits of closer cooperation with Kazakhstan are clear. However, Russia will have to compete with well-established players on Kazakhstan’s uranium market.

3. Kazakhstan has aspirations to become a world leader in uranium mining and to focus production at the highly processed end of the nuclear fuel cycle. This was the backdrop for a recent transaction which will have a significant impact on the country’s nuclear industry. In the autumn of 2007, KazAtomProm purchased Toshiba’s 10% share in Westinghouse Electrics, a leading producer of nuclear reactors, for USD 540 million. This transaction has secured a permanent nuclear alliance between KazAtomProm, Toshiba and Westinghouse Electrics. For Kazakhstan, this creates new opportunities to develop a hi-tech nuclear industry and to market its output in the West. Supplying high-end nuclear products to Western markets is one of KazAtomProm’s development priorities, along with continued cooperation with Russia in supplying Soviettype reactors.

4. The need to integrate the nuclear power complexes of Kazakhstan and Russia along the entire production chain is a logical response to their urgent need to reduce their energy deficit, and to the synergies which exist between their production capacities and technologies at each stage of the nuclear fuel production chain: (1) uranium mining, (2) uranium enrichment, (3) production of fuel pellets and fuel elements, (4) reactor design and production, primarily 300 MW VBER-300 power reactors, (5) construction and operation of nuclear power plants, and (6) nuclear waste processing and disposal. 5. Kazakhstan has plans to develop its own nuclear power industry and is likely to base this on 300 MW Russian-Kazakh reactors and, in the longer-term, 1000 MW Westinghouse reactors. 6. The development of this capital-intensive sector will require extensive financing based on credit from a number of sources. International and national development banks are one promising potential source of such funding. The ability to secure this capital from international and national development banks rests entirely upon the nuclear energy industry’s potential for development, innovation, diversification and integration. The Eurasian Development Bank, VEB (Russian Development Bank) and the Development Bank of Kazakhstan have indicated their recognition of this. E.g., the EDB has extended credit to the Russian-Kazakh Zarechnoye JV.