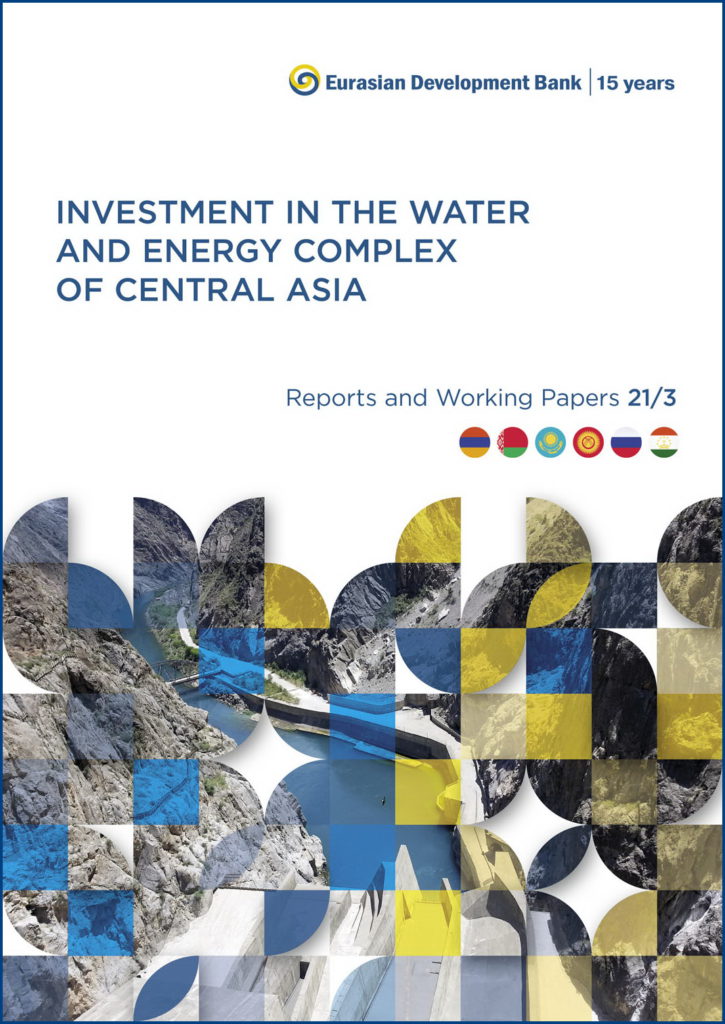 Investment in the Water and Energy Complex of Central Asia

The Eurasian Development Bank (EDB) has published a report Investment in the Water and Energy Complex of Central Asia.

The authors argue that the lack of cooperation among the Central Asian countries in the water and energy complex and, consequently, the implementing technical and economic solutions result in significant economic losses. According to the reported data, annual economic damage and unrealised economic benefits are estimated at as high as US $4.5 billion, which is 1.5% of the regional GDP. Losses in agriculture and the energy sector are estimated at 0.6% and 0.9% of Central Asia’s GDP, respectively.

The EDB preliminarily estimates that remedying inefficiencies in the water and energy complex might add 7% (US $22 billion) to the region’s GDP over a five-year horizon. The region’s economies will grow by an additional 1.5 p.p. in five years (compared with the business-as-usual scenario). In the longer term perspective (up to 2050), according to the World Bank estimates, the difference between the costs of the business-as-usual scenario and the benefits of the scenario envisaging stronger cooperation in Central Asia’s water and energy complex might reach 20% of GDP.

The drastic weakening of cooperation in Central Asia’s water and energy complex in the 2000s coincided with a significant growth of the load on the energy sector. This occurred in the context of accelerated growth in the energy-intensive industries as well as high population growth. With a significant decline in mutual average annual power flows, the Central Asian countries have been actively building new and upgrading existing generating capacities. This has made it possible to meet the increasing demand with in-country generation. In fact, the countries’ energy systems have become self-sufficient over the past two decades.

As in most Central Asian countries the water and energy complex is insufficiently attractive for private and foreign investors, an important source of finance for public initiatives are multilateral development banks (MDBs). So far, 104 projects worth US $10.2 billion are in progress. The leading financier is the EBRD with a portfolio of US $3.3 billion, or 32.7% of total MDB financing in Central Asia. It is followed by the World Bank with US $3.0 billion (29.6%) and the ADB with US $2.6 billion (26.2%). The EDB and EFSD, the EIB, and the AIIB together account for US $1.2 billion (11.5%).

The identified total investment proposals in the energy segment of Central Asia’s water and energy complex are currently estimated at US $52.8 billion. Of these, generation accounts for US $45.4 billion (86.0%) and grids US $7.4 billion (14.0%). It is expected that despite the growth of electricity consumption in the region, completion of investment projects scheduled for the next decade will avoid electricity shortages. In all CA countries, most identified investment projects pursue national interests without proper regard for regional interests, which is a consequence of the uncoordinated evolution of the water and energy complex.

Value and Structure of Identified CA Energy Investment Projects, %, as of 1 April 2021

The report notes that the distinctive feature of the Central Asian countries in the Aral Sea basin is that their socio-economic development is taking place in the context of depleting water resources, and this trend will determine relations among the region’s countries. In terms of water availability, they are in the category of water-stressed countries according to the international classification (1,405 cubic meter per person per year with a threshold of 1,700). EDB analysts argue that under the moderate development scenario for CA, this trend will persist over the long-term perspective.

The Bank’s analysts conclude that the achievement of Central Asia’s sustainable socio-economic development goals will be largely dependent on the state of water resources. “The challenges to the sustainability of the energy segment of Central Asia’s water and energy complex are numerous, and each country in the region is looking for its own solution to counter them,” said Evgeny Vinokurov, EDB and EFSD Chief Economist. “However, the key challenges in Central Asia’s water and energy complex will be associated with the growing scarcity of water resources. Water use in Central Asia is growing rapidly, driven both by demographic factors and by the development of manufacturing and agriculture, primarily increased irrigation.”

Use of Water and Land Resources in the Aral Sea Basin

In this context, reaching a consensus on inter-state water allocations in transboundary river basins is a key task that requires political will and a comprehensive solution, considering both socio-economic and environmental changes and the political situation in the countries bordering the region. The objective to converge positions on the shared use of transboundary water resources cannot be seen outside each country’s economic development model and economic cooperation in the region as a whole. Strengthening trade and economic ties among the region’s countries and their close cooperation, in which water policy is a valid factor of economic integration, will contribute to solving the problem of shared transboundary water resources.

You can also view the report Investment in the Water and Energy Complex of Central Asia at the EDB website.