Home › Eurasia › EU-Russia Relations › The Eurasian Economic Union and the European Union: Will There Ever Be an Economic Integration Agreement?
← PrevNext → 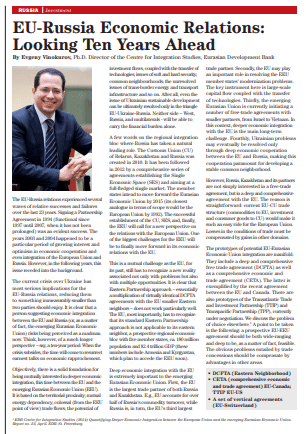 The Eurasian Economic Union and the European Union: Will There Ever Be an Economic Integration Agreement?

The EU-Russia relations experienced several waves of relative successes and failures over the last 23 years. Signing a Partnership Agreement in 1994 (functional since 1997 until 2007, when it has not been prolonged) was an evident success. The years 2003 and 2004 happened to be a particular period of growing interest and optimism in economic cooperation and even integration of the European Union and Russia. However, in the following years, this issue receded into the background. The current crisis over Ukraine has most serious implications for the EU-Russia relations, reducing them to something immeasurably smaller than two parties should enjoy. It is clear that a person suggesting economic integration between the EU and Russia (or, as a matter of fact, the emerging Eurasian Economic Union) risks being perceived as a madman now. Think, however, of a much longer perspective – say, a ten-year period. When the crisis subsides, the time will come to resurrect earnest talks on economic rapprochement. Objectively, there is a solid foundation for being mutually interested in deeper economic integration, this time between the EU and the emerging Eurasian Economic Union (EEU). It is based on the territorial proximity; mutual energy dependency; colossal (from the EEU point of view) trade fl ows; the potential of investment fl ows, coupled with the transfer of technologies; issues of soft and hard security; common neighbourhoods; the unresolved issues of trans-border energy and transport infrastructure and so on. After all, even the issue of Ukrainian sustainable development can be ultimately resolved only in the triangle EU-Ukraine-Russia. Neither side – West, Russia, and multilaterals - will be able to carry the fi nancial burden alone. A few words on the regional integration bloc where Russia has taken a natural leading role. The Customs Union (CU) of Belarus, Kazakhstan and Russia was created in 2010. It has been followed in 2012 by a comprehensive series of agreements establishing the Single Economic Space (SES) and aiming at a fullfl edged single market. The member states intend to move forward the Eurasian Economic Union by 2015 (its closest analogue in terms of scope would be the European Union by 1992). The successful establishment of the CU, SES, and, fi nally, the EEU will call for a new perspective on the relations with the European Union. One of the biggest challenges for the EEU will be to fi nally move forward in its economic relations with the EU.