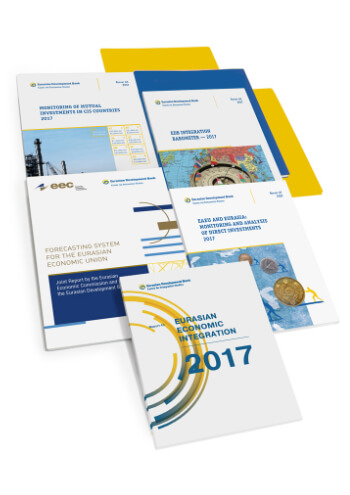 The Reports of the EDB Centre for Integration Studies, 2012-2018

In 2011-2018, I was founding  director of the Center for Integration Studies at the Eurasian Development Bank (EDB).  The Center specialized in quantitative economic analysis and research on Armenia, Belarus, Kazakhstan, Kyrgyz Republic, Russia, and Tajikistan. It worked closely with various government agencies, including ministries of economy, finance, presidential administrations, etc., as well as international academic community. Beyond countries mentioned above, the Center’s geographical focus covered the European Union, East Asian, and South-East Asian countries.  The Center published most of its research (50 reports over 2011-2018). It also produced about dozens of non-public analytical notes and briefs for its member states annually.  It pioneered several research areas for the Eurasian Economic Union, including the analysis of macroeconomic linkages, cross-border FDIs, free trade areas, and non-tariff barriers. The Centre accounted for 40% of downloads and page views of the EDB website (ca. 100,000/year) and more than 1100 mentions in mass media yearly.