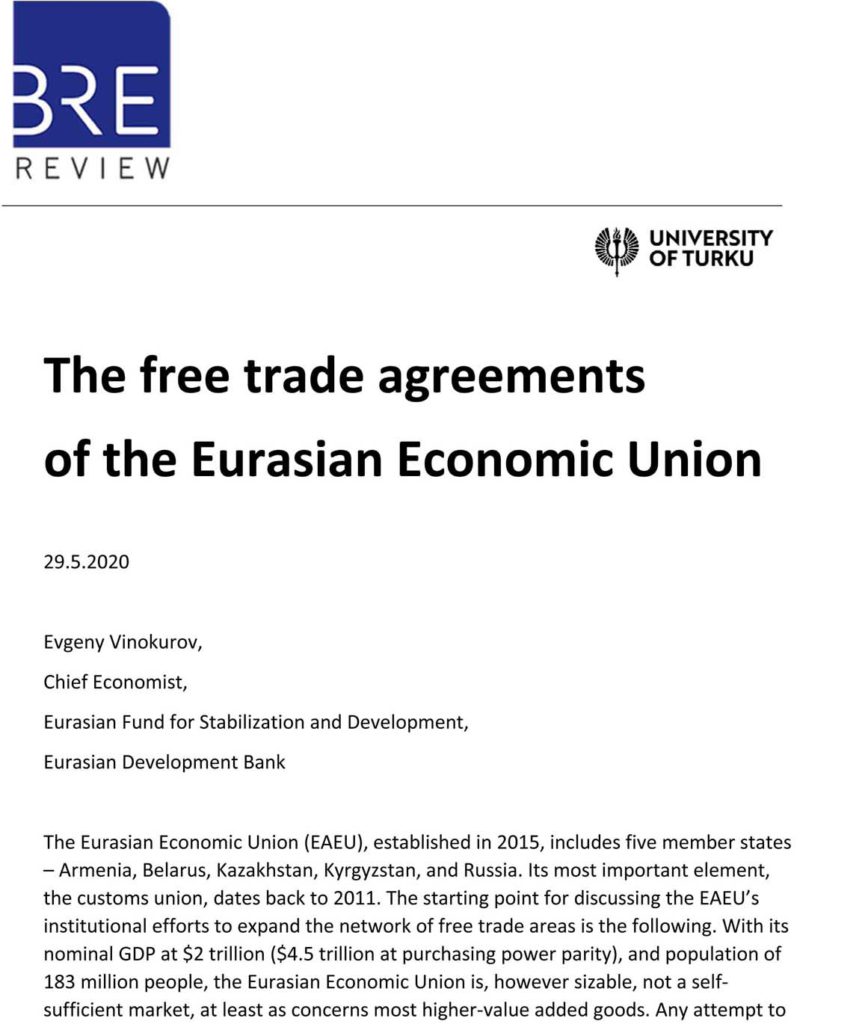 The free trade agreements of the Eurasian Economic Union

The Eurasian Economic Union (EAEU), established in 2015, includes five member states – Armenia, Belarus, Kazakhstan, Kyrgyzstan, and Russia. Its most important element, the customs union, dates back to 2011. Over the last five years, the Eurasian Union has started to build on its own network of free trade agreements with the view to promote mutual trade and investments with various economic partners.

The starting point for discussing the EAEU’s institutional efforts to expand the network of free trade areas is the following. With its nominal GDP at $2 trillion ($4.5 trillion at purchasing power parity), and population of 183 million people, the Eurasian Economic Union is, however sizable, not a self-sufficient market, at least as concerns most higher-value added goods. It is approximately ten time smaller (5-6 times in terms of purchasing power) than the key world’s economies – the US, the EU, and the PRC. Any attempt to build a ‘Eurasian fortress’ and to fend off the Eurasian economy from the outside world would be economically suicidal in the long term. The EAEU's member states’ economies would be forever doomed to play catch up technologically. A distinct disadvantage of such a future is the inability to achieve economies of scale on most high-tech goods. The opportunities to export non-primary goods would be missed. Consumers, effectively cut off from competitive imports, would lose. Domestic producers, protected from competition, would grow overly lax. A certain level of market protection might be acceptable in order to create a comfortable ‘springboard’ for national producers. However, in the long term, there is no alternative to integration into world markets and global value chains.

A standard strategy to pursue this path while paying attention to the particularities of trade and investment ties is to negotiate free trade agreements (FTAs). In addition to reducing or eliminating trade duties, they govern numerous mutual agreements on investment conditions, capital flows, technical regulation, dispute resolution procedures, rules for determining the country of origin of goods, and other important issues pertaining to market access. The most realistic way for the EAEU to promote its foreign economic interests is to form a network of comprehensive bilateral free-trade agreements between the Eurasian Union and its partners – in particular its major partners. The network of free-trade agreements aims to expand and simplify the access of producers and exporters of goods and services from the EAEU to other countries' markets, help the Union members integrate into regional and global production chains, and attract investments.

The first FTA – the one with Vietnam – has been signed in 2015. Since then, multiple FTAs have been signed, negotiated, or discussed.  Table 1 summarizes the current state of affairs. Apart from Vietnam, EAEU signed the free trade agreements with Singapore, Iran (a limited scale FTA due to the existing sanctions regime), and Serbia (the latter replaced already existing bilateral agreements with the EAEU key economies). Negotiations with India, Egypt, Indonesia, and Israel find themselves at various stages. Besides, there were talks / research groups / memoranda of understanding with South Korea, Cambodia, Mongolia, Peru, Chile, and MERCOSUR.

The short assessment of the current state of affairs is that the progress has been slower than expected. Most importantly, all signed and negotiated FTAs are with minor trading partners. The same holds for the prospective agreements where the negotiations/formal consultations are ongoing. In the short and medium-term, under the current political conditions, the EAEU countries are gaining experience and competence by drafting and concluding free trade agreements with small trading partners.

Even current progress with India falls into the same category. India is naturally a large economy but a minor trading and investment partner for the EAEU. It is bound to remain the same for a long time due to logistics restraints.

In the longer term, breakthroughs with major partners are sorely needed. Most importantly, there are two major trade and investment partners for the EAEU countries. The first one is the European Union to the west. The second one is China to the east.

The Eurasian integration bloc cannot do without a large comprehensive agreement with its main trade and investment partner, the European Union. Likewise, the EU should not ignore the 183-million strong market to the east. When political framework would allow, negotiations should begin on a complex EU-EAEU trade and economic deal. I suggest that, due to the scope of related issues and an asymmetry of underlying interests, the anticipated agreement – or rather a set of multilateral and bilateral agreements – should be framed as a ‘mega deal’. Mutual concessions and compromises will be necessarily interconnected. The importance of various domains will be different for both parties. Deferring in one area, the partner will expect a trade-off with respect to another problem.

As the PRC-EAEU trade turnover exceeded $100 bln in 2017, an agreement on trade and economic cooperation between China and the Eurasian Union has been signed on May 17th, 2018, in Astana, Kazakhstan (the same city, incidentally, where Chairman Xi Jinping first announced the Silk Road Initiative in 2013). The signing parties - representing effectively six countries – stressed the importance of economic cooperation, in particular its trade, e-commerce, investment, and transportation components. The representatives of the EAEU stressed that they welcome an intensive and multi-format cooperation with China, judging it to be a top priority for their countries. This is a non-preferential agreement, however. It means that it does not include any commitments on tariffs. Instead of this, the agreement covers issues of customs administration, technical, sanitary and phytosanitary regulations. The reason for this limited solution lies on the EAEU side. Its member states – in particular Russia with its developed industry – are afraid that an uninhibited flow of Chinese goods under no tariff policy would ruin the competitiveness of their industries. The current situation implies that a full-scale FTA of China and the Eurasian Economic Union might become possible not in the short- or mid-term but rather in the long-term. Speeding up this process would not help at this stage.

A more realistic and mid-term prospect is an FTA with South Korea. In 2016-17, EAEU has shelved a potentially important deal with South Korea due to the concerns on the competitiveness of the Russian automotive sector and electronics. Apart from being a $2 trln economy, S. Korea enjoys relatively good logistics to the EAEU markers. One could try to resurrect this prospect now employing various protective measures for the EAEU internal market.

Table 1. Current Landscape of Economic Agreements of the Eurasian Economic Union, as of May 1st, 2020.

More on the EAEU’s FTAs and their logic:

More on the potential EU-EAEU ‘Megadeal’ and its potential features and domains:

Vinokurov, E. (2014) A Mega Deal Amid a Relationship Crisis: Why a European-Eurasian Integration Agreement Should Be Discussed Now. Russia in Global Affairs, 5. LINK