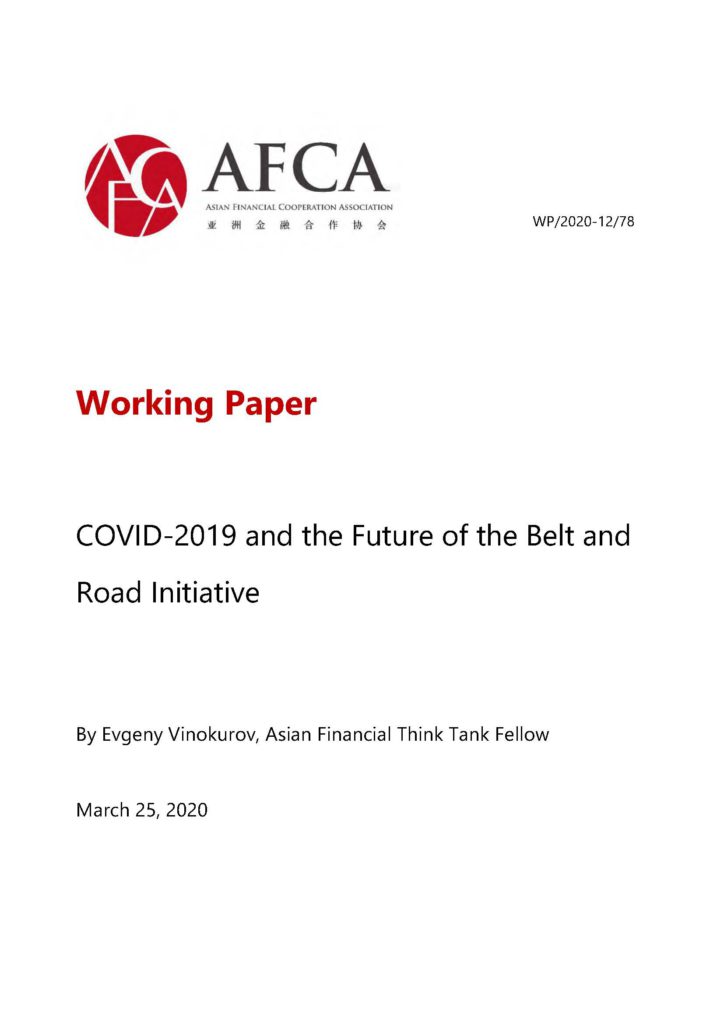 COVID-2019 and the Future of the Belt and Road Initiative

As a cross-border phenomenon, the BRI is vulnerable to the COVID-19-induced crisis

The rapid spread of COVID-19 has led to uncertainty and loss of confidence unseen since 2008. The market volatility has also risen extremely fast to a level unseen over the last decade. Even against this unfavorable environment, there are sectors that have taken a disproportionate hit, including tourism, passenger transportation, airlines, hotels – practically everything that has a built-in key cross-border dimension.

Infrastructure, as a rule, is not among the most vulnerable sectors, quite the contrary. It has an inherent long-term dimension. While a cross-border component is important, most basic infrastructure is strictly national. However, the 2020 trends for the Belt and Road Initiative might not fit this general pattern. The BRI intends to build up basic infrastructure across the globe, with a particular focus on Greater Eurasia to the South, West, and North of China. Under the helm of this very large-scale initiative, hundreds of billions of dollars are mobilized and disbursed. A notable percentage of BRI projects possess an explicit cross-border nature – mostly automobile corridors and railroads, but also electric power generation and distribution projects. The BRI is by its very nature a cross-border phenomenon. Thus, it is vulnerable to the coronavirus-induced economic crisis.

132 countries that are partners in the Belt and Road Initiative account for 35% of global GDP, 43% of global trade in goods, and 60% of the world’s population. A recent comprehensive study estimates the amount of disbursed FDI at $100 bln, and that of committed and disbursed loans $600 bln. Loans to low-income and lower-middle income countries are often concessional – e.g., for Kyrgyzstan and Tajikistan, two low-income countries immediately bordering China, a typical repayment period of around 20 years, an effective interest rate of 2% per annum, and a grace period of 5–12 years.

Negative effects of COVID-19 on the BRI

There are a number of direct and indirect negative consequences that the current crisis might exert on the flawless and efficient implementation of the Belt and Road Initiative’s projects. Let us try to compile a tentative list.

Second, there are reasons to be concerned with the countries’ debt and fiscal sustainability. Many of the recipient countries are low and lower-middle income economies with unstable economic growth. For this reason, China’s plans, announced at the Second Belt and Road Forum in Beijing in April 2019 to analyze the debt sustainability of each country in cooperation with international financial institutions, deserve applause.

Third, there is the worry that there will be less financial resources available from China to finance the BRI projects. BRI projects are not only capital-intensive but also require concessional financial (‘long and cheap money’), in particular in the low and lower-middle income economies across Eurasia and the world. Since the PRC needs much of its financial might to stimulate its own national economy in the short term, will the financial resources be there for the long-term BRI projects? These worries are still to be addressed.

Fifth, the multilateralization of the BRI had only begun to unfold in 2019, with the first material results to be expected in 2020 and 2021. Under the multilateralization process, many well-funded international financial institutions were expected to enter the game (e.g., the World Bank, ADB, IsDB, AIIB, NDB, IADB, EFSD) and share the burden of infrastructure financing with China. International financial institutions provide project financing based on signed and ratified international treaties that do not depend on local legislative changes, which helps to mitigate certain risks. Under crisis conditions, the international financial organizations deploy both their financial and human resources to fight the crisis, thus stripping much-needed resources from long-term infrastructure projects.

Globalization and economic integration are multi-faceted phenomena. Even their sincere and active proponents, myself included, should realize they also entail negative aspects. These are not limited to illegal activities, such as drug or human trafficking. The movement of people across borders also creates perfect opportunities for the spread of diseases. Compare the two and a half decades that Bubonic plague took to travel from China to Europe in the 14th century with the rapid spread of avian flu and the most current example of COVID-19 turning pandemic within two months. In order to contain the global microbial market, international cooperation is called for. However, in practice it can be used in this context to restrict economic linkages between countries and as justification for protectionism.

Our 2012 book, ‘Eurasian Integration: Challenges of Transcontinental Regionalism’, became probably the first international volume on transcontinental regionalism in Greater Eurasia. Its main hypothesis was that that advancing towards continental Eurasian common markets, based on the development of common infrastructure, brings significant economic benefits. At the same time, we highlighted that the fight again common threats, most importantly, drug trafficking, human trafficking, and trans-border epidemics (under the nametag ‘a common microbial market’) should accompany a positive integration agenda.

Overall, the ‘darker side’ of globalization raises important issues for the region and challenges a number of key policies. Much attention has been devoted to emerging problems; after the 9/11 terrorist attacks, for instance, drug and arms trafficking became areas of relentless public debate, and there have been several epidemiological threats in Eurasia in the last decade – from SARS to EHEC. Nevertheless, decision-making by public agencies has often been hampered by misconceptions and lack of appropriate information. Very often, the line between actual and potential threats is a very fine one. The degree of international cooperation is often inadequate; although all countries recognize the importance of these issues (at least, rhetorically), they are often unable to respond appropriately because their administrative bureaucracies fail to function efficiently. A very typical reaction to trafficking, illegal migration, and epidemics is to tighten border controls. This, however, restricts economic ties, with potentially disastrous consequences. The problem is not only that a potential factor for growth has been restricted, but also that by limiting the economic links between Eurasian countries, the prospects of successfully tackling the ‘darker side’ of regionalization, of fostering economic development and alleviating poverty in the poorest parts of the continent, become ever more distant. The COVID-19 crisis demonstrates very vividly that it is time to strengthen this dimension of international cooperation, both within the World Health Organization and in smaller formats.

Policy recommendations to the PRC and its partner countries

Let us formulate several applied suggestions that might be considered by the PRC and its partner counties in defining their attitude towards the BRI projects facing the current crisis.

First, look past 2020. The BRI is a very long-term and a truly strategic initiative. In order to build basic infrastructure in a consistent and efficient mode, one has to stick to a long-term vision that can weather multiple crises along the way. The Belt and Road has a chance to become a classic initiative of this sort. It intends to qualitatively raise the level of infrastructure around the globe and, in particular, to connect the Greater Eurasian landmass in a way it has never been connected before. This view is particularly pertinent for cross-border infrastructure. Apart from long-term financing, it entails a shared strategic vision of international economic cooperation. Such a vision is difficult to formulate and very difficult to negotiate. Once agreed upon, it should be durable long-term.

Second, China, its partner countries, and partnering institutions should pay great attention to the issues of debt and fiscal sustainability. In fact, the current crisis will already test the limit of sovereign debt sustainability around the globe. In some BRI partner countries, 40–45% of their external public debt is accounted for by BRI-related financing (granted, much of which comes on concessional terms, which in most cases alleviate sustainability concerns). We applaud the 2019 decision, announced at the 2nd BRI Forum in Beijing, to improve debt sustainability analysis in cooperation with the multilateral financial organizations.

In the extreme case, should the COVID-19 crisis prove to be longer and tougher than currently expected, some restructuring might be necessary for some recipient countries.

Third, keep the export-related railway subsidies for trans-Eurasian transit and do not slash them, at least in the active phase of the current crisis. In a recent AFTT article, I described trans-Eurasian container transit as a ‘BRI success story’. This is truly so: since 2013, the formerly negligible volumes have mushroomed to more than 400,000 containers a year. This spectacular rise is based on the interplay of three factors: Chinese subsidies for the outbound container trains from central provinces; serious efforts by Kazakhstani, Russian, and Belarusian railways and authorities to streamline procedures and eliminate bottlenecks; and realization of the land-based routes’ advantage of delivering goods from central China to Central Europe within 15–17 days, as against 35–40 days by sea.

The first factor was probably the decisive one, at least to jump-start the trans-Eurasian routes. Our analysis shows that the annual average doubling of the number of container trains along PRC–Eurasian Economic Union (EAEU) –EU routes in 2013–2017 was largely attributable to subsidization of export-oriented railway freight traffic by the Chinese authorities. A recent paper by Feng, Zhang, Liu, and Fan (2020) further reinforces this view and hints at higher levels of subsidies than previously assumed – up to $6,000 per 40-foot equivalent unit container (FEU). It further concludes that the optimal subsidy amount might in the $2,000–2,500 range. This estimate might indeed show the general direction of an optimal subsidy. However, it would be advisable to start moving towards lower levels once the current crisis is past its acute phase and the durability of trans-Eurasian transit is restored. In the longer term, my recommendation would be to at least partially retain export subsidies and, importantly, to provide more transparency about their level. In the absence of such guidance, infrastructure, transportation, machine-building producers, and logistics companies would face uncertainty about underlying conditions, and, thus, refrain from investing.

Fourth, and perhaps, most importantly, BRI partner countries would be well advised to contain the expression of negative sentiments. Facing a crisis, it is very tempting for national governments to revert to protectionist policies and to slash long-term initiatives that feature a low margin and will reveal most of their positive effects in the long-term future. This recommendation might concern the recipient countries more than China itself.

I end with a plea to look beyond the immediate effects and limitations faced in the heat of the battle against the coronavirus-induced economic crisis. The BRI community should perceive and treat the BRI as a truly long-term policy. Let us look past 2020 while assessing the impact and effectiveness of the BRI. It is too valuable to be discouraged by the coronavirus hit.