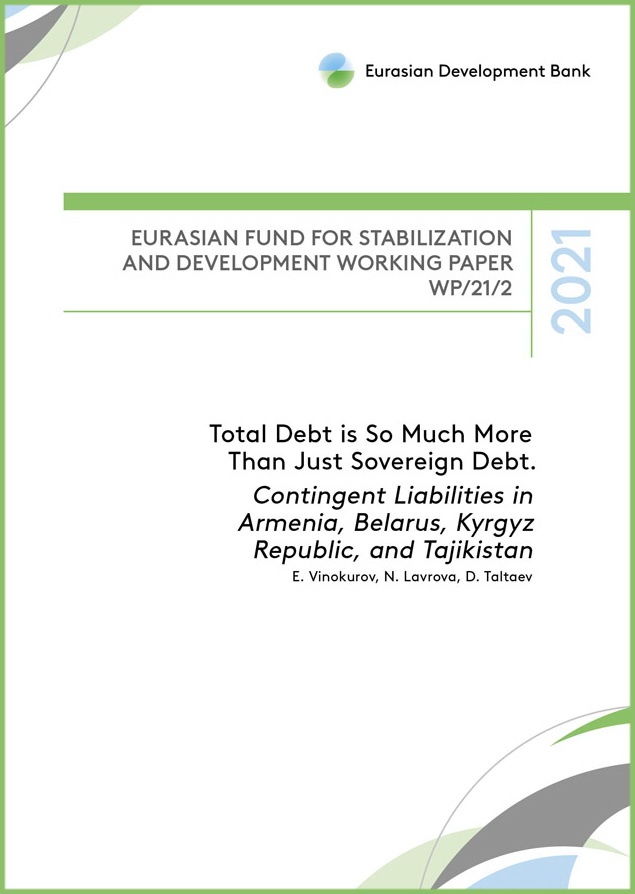 Total Debt is So Much More Than Just Sovereign Debt. Contingent Liabilities in Armenia, Belarus, Kyrgyz Republic, and Tajikistan

The Eurasian Fund for Stabilization and Development has published a Working Paper WP/21/2 “Total Debt is So Much More Than Just Sovereign Debt. Contingent Liabilities in Armenia, Belarus, Kyrgyz Republic, and Tajikistan”. This study aims to contribute to understanding the potential risks and impacts of both explicit and implicit contingent liability shocks on government fiscal and debt positions in the EFSD recipient countries. Special attention is paid to the significance of state-owned enterprises and their role in countries’ debt positions.

Available global or regional debt datasets primarily cover sovereign obligations in advanced and emerging markets. However, the focus of the EFSD research – for the first time in the Eurasian region – is to investigate the total debt, which includes private nonfinancial obligations (households and enterprises). In addition, the study considers publicly guaranteed debt and on-lending, when governments borrow funds from nonresidents and then on-lend the funds to enterprises. The results of this study are the following.

Cross-country evidence within the EFSD region suggests that countries with market access are at the top of the EFSD private debt ranking. In contrast, in Tajikistan, companies’ debt obligations are only half of the EFSD average. This relatively low indebtedness of Tajik state-owned companies can be mainly explained by the country’s access to concessional credits, which the government provides as on-lent loans to large and systemically important companies.

A comprehensive analysis of debt instruments and contingent liabilities reveals that two EFSD recipient countries, Belarus and Tajikistan, are exposed to relatively high fiscal risks. First, both countries have a high degree of government involvement by providing guaranteed and on-lent loans. In addition, their state-owned companies are noted for a relatively weak financial performance and high arrears. Concurrently, their fiscal transparency may need to be further improved.

In order to estimate the potential effect of contingent liability shock, the study includes stress-test analysis based on debt sustainability framework (DSF). In the scenario of a contingent liability shock, we assume that some SOEs will be incapable of servicing their debt obligations. Thus, governments may need to bail out these companies. The simulation of the contingent liability shock suggests that weaknesses of fiscal frameworks in Belarus and Tajikistan may be a key source of concern for their debt sustainability. In Belarus, according to the adverse scenario, public debt might increase to almost 61% of GDP in 2022, compared with the projected 46% of GDP in 2022. In Tajikistan, in 2022, the debt-to-GDP ratio may increase to 58% under an adverse scenario (baseline scenario – 46.1%). In the medium run, public debt would moderately decline and, by 2025, it should total 52.4% of GDP. This implies that, over 2023–2025; the country will not be able to reduce its debt obligations to levels similar to those prevailing in 2021.

An increased debt level is only one side of the problem, however. Another issue is related to financing needs. Our estimates indicate that, in Belarus, in the short run, a contingent liability shock would result in a surge in public financing requirements. By 2025, Belarus’s financing needs are expected to decline slightly, however, they are likely to remain a source of vulnerability for debt sustainability. Tajikistan, in the long run, will be faced with increased amortization payments and debt-servicing obligations coming due. However, since Tajikistan is a low-income country, it has access to concessional loans, which are expected to become the main financing sources. Given this assumption, the country’s liquidity position will remain moderate in the medium run.

On the whole, contingent liability risks have remained heightened for some EFSD economies. Thus, the countries may need comprehensive fiscal strategies. “We recommend to conduct a comprehensive risk analysis, including risks from on-lending and guarantees, – stresses the EDB and EFSD Chief Economist Evgeny Vinokurov. – We also emphasize the importance of public corporations’ performance for debt sustainability. This type of assessment can be considered as a foundation for effective risk management. Complete and clear information on different sources of contingent liabilities may strengthen credibility and positively affect the credit rating”.

The full text of the Working Paper is available at the EFSD website.

To access other EFSD publications, please use this link.