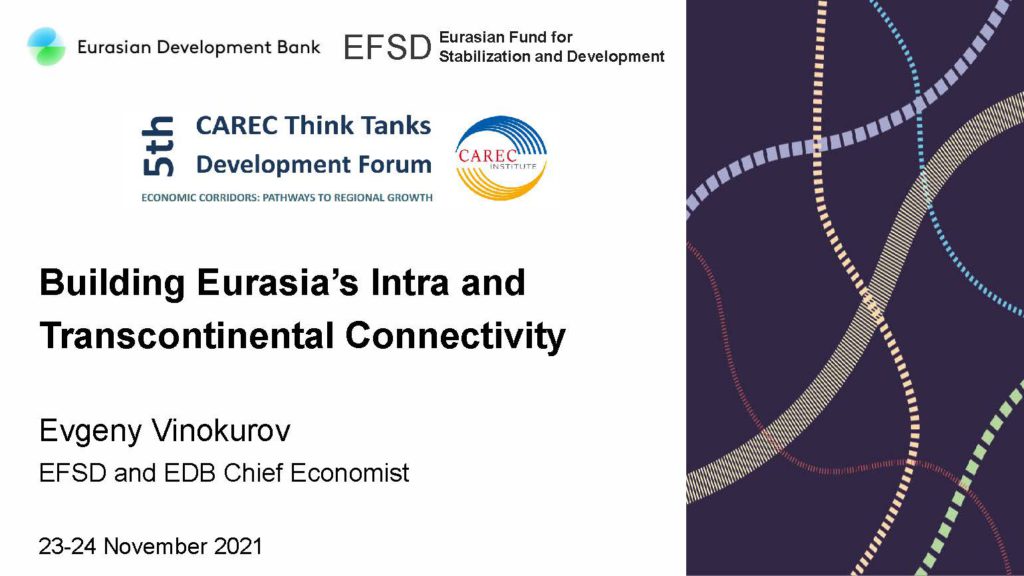 The development of international transport corridors in Eurasia is a key instrument for developing trade and regional economic integration in Eurasia. A large number of countries in the regions are landlocked. Due to their geographical restrictions and difficult access, these countries trade less (on average 30% less) and experience weaker growth (on average 1.5 p.p. less) than countries with a good access to sea. Since their volume of trade depends on the access to foreign transportation corridors, these countries show strong interest in facilitating trade and decreasing cost and time of delivery. The long-term vision is to turn Central Asia into the Eurasian crossroads to help them overcome it land-locked-related constraints – by developing land-based transport and economic corridors.

Moreover, all major economic powers of the Eurasian landmass – the EU, China, Russia, India, South Korea, and others - also benefit substantially from developing regional transport connections. Transcontinental connections offer faster (at least two times) and cleaner (at least 25% less) delivery. They might be more stable. Recently, they have even become financially competitive. Due to the global supply chains disruption during the pandemic period, temporarily Suez Canal blockage, and the very rapid global economy recovery in 2021, rail delivery from China to the EU and back has become cheaper than delivery by sea. A year ago, the values of two price indices crossed - the “railway” ERAI (Eurasian Real Alliance Index) and the “sea” WCI (World Container Index). I do not expect this situation to hold. (The sea-based delivery tariffs would inevitably fall, although $1500/container rates would probably never return). Yet, this is another reason to develop land-based connections to provide world economy with an alternative, thus effectively increasing overall stability. This is a lesson of the pandemic.

East-West land-based container traffic is a success story: 77 times increase from 7 thousand TEU in 2010). The volume of rail transit has increased by 1.5 times in 2021 in annual comparison. Transportation on the route from China to Europe demonstrated 1.4 times growth, while from Europe to China - 1.7 times growth. In January – November 2021, 594 thousand TEUs were transported by the China - Europe - China railway infrastructure. For comparison, in 2020 the annual volume was equal to 547 thousand TEU The share of rail transportation in the structure of China—Europe—China cargo flows increased from 3% to 5%. According to EDB estimations, the volume of rail transit can increase further up to 1.3-2 million TEU.

The North-South axis: the international North-South transport corridor (INSTC) creates multiple opportunities. INSTC is an essential component of the network of latitudinal and meridian trade routes. For instance, the INSTC connects with Black Sea Ring Highway, Baku - Tbilisi – Kars Railway, CAREC Corridors (including corridor №2 or the Trans-Caspian corridor), Europe-West China Corridor, OSJD Corridors, TRACECA, Trans-Siberian Railway, Lapis Lazuli Route. Therefore, the development of the INSTC contributes to the establishment of an integrated Eurasian macro-regional transport and logistics system. It will in turn serve as the basis for regional trade and investment cooperation and can become a driver for the Greater Eurasia.

There is a window of opportunity. We witness active interaction of the EAEU, India, Iran, Kazakhstan, Azerbaijan, and other countries to develop transport and transit potential of the Caspian region. In terms of trade development, the INSTC has certain comparative advantages. E.g., it features shorter distances and faster deliveries (15-24 days versus 30-45 days via Suez) from India to Russia. As the INCTS is based mainly on rail transport, it also offers the advantage of lower greenhouse gas emissions.

The North-South corridor features considerable potential. EDB will very soon publish a study on the corridors. According to its estimates, the total potential of containerised shipments is 325 to 662 thousand TEU. The main contribution (up to 75%) is the EAEU’s trade-related container traffic with Azerbaijan, Iran, India, Pakistan, etc. Essential transported products are food products; metals (ferrous and non-ferrous, metal products); timber, wood products, paper; machinery and equipment; fertilisers; textiles, textile products, footwear, and others. The grain is currently the main commodity delivered via the INSTC. The volume of transported grain could reach 8.7 to 12.8 million tons by 2030. Summing up estimations for containerised and non- containerised goods transported via the corridor leads to a final estimate of the total potential of cargo transportation at 14.6 to 24.7 million tons by 2030 from the current 5 mln tons.

If North-South and East-West corridors are efficiently interlinked, substantial synergies will arise. We see significant synergies from interlinking the East-West and North-South trans-Eurasian routes. E.g., our estimates imply that developing the North-South transportation corridor in conjunction with the East-West routes would lead to double increase in container traffic at the North-South axis compared to the isolated development.  Linking the INSTC with the East-West transport routes in the Caspian Region lays the groundwork for transforming Central Asia into a Eurasian transport and logistics crossroads. Central Asian countries become a critical element for the integrated Eurasian macro-regional transport and logistics system in this context. It will be challenging to deal with regional development challenges without their participation. The sustainability and success of regional and Eurasian integration processes will depend on the depth and intensity of Central Asia countries’ involvement. Coordinated efforts by these countries, directed at the development of transport and logistics infrastructure, will reinforce the region’s transport links with Asian markets (China, India, Turkey, Iran, Pakistan). The most important thing is that it will boost inter-regional connectivity within the Eurasian landmass and unlock new economic opportunities for many other Eurasian countries. These developments will help create local industrial centres and incorporate innovative industrial clusters and agriculture into the global value chains.

In the future, the East-West and North-South transport corridors can be transformed into economic development corridors. Implementing large transport infrastructure projects, removing technical and physical bottlenecks and institutional barriers, digitalisation, and applying new transport and logistics technologies will reduce freight shipment time and operating costs in Eurasia. At the same time, this enhanced connectivity will contribute to the sustainable development of the entire Eurasian region. Effective transport corridors stimulate the growth of economic activity through the development of industrial parks and economic zones and creating new clusters in agriculture and manufacturing – often in unexpected and unforeseeable ways.

Implementing major infrastructure projects is challenging because commercial banks underfinance the sustainable infrastructure segment.   Infrastructure projects are capital intensive and have long horizons. Thus, they require synchronized efforts and capital-pooling by several IFIs. IFIs are uniquely positioned for the cross-border projects due to (a) the capacity to accompany the entire life project cycle (b) membership of participating states (c) supranational status and (d) the ability to affect the transnational ‘rules of the game’.