Home › Eurasia › Economy of the Eurasian Continent › One Eurasia or Many?
← PrevNext → 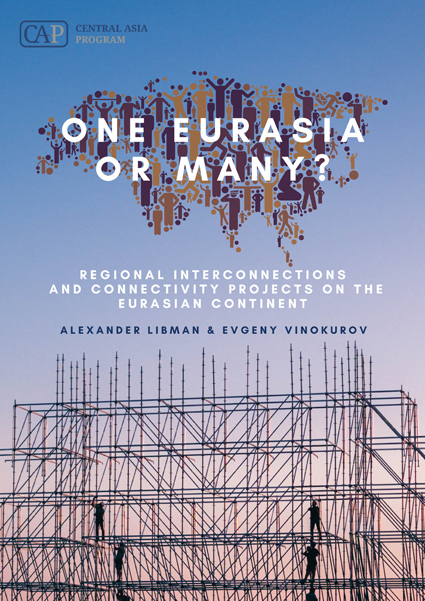 One Eurasia or Many?

Libman A., Vinokurov E. (2021) One Eurasia or Many? Regional Interconnections and Connectivity Projects on the Eurasian Continent. Washington, D.C.: George Washington University.

A new book by Alexander Libman and Evgeny Vinokurov has recently been published by Central Asia Program, Institute for European, Russian and Eurasian Studies Elliott School of International Affairs, The George Washington University. One Eurasia or Many? sheds new light on Eurasian connectivity and regionalism before and after the pandemic.

The aim of the book is to critically review the processes of integration and region-building in Greater Eurasia. Integration is a broad term that covers any rise in economic and social interconnections, whether driven by top-down state policies (regionalism) or by the bottom-up activities of companies, individuals, and business networks (regionalization). Alexander Libman and Evgeny Vinokurov focus on regionalism, i.e., institutional arrangements and frameworks created by Eurasian countries. Thus, the authors are interested not in surveying the bottom-up interconnections that are flourishing across Eurasia (i.e., trade networks or pipeline routes), but rather in analyzing the projects promoted by individual countries (or groups of countries) to foster economic integration in Eurasia. The book therefore focuses on the emerging intergovernmental institutional structure of Eurasian connectivity: it aims to discuss the existing projects, their ideational foundation, and their potential.

Structure of the book

The book is organized as follows. The first chapter raises three important questions. First, ‘Eurasian regionalism’ obviously requires some sort of ‘Eurasian region’ – a geographical boundary for the design of regionalist projects. These boundaries are not necessarily (and not only) determined by the objective economic interconnections; equally important is some sort of common identity, a perception of ‘belonging’ to a region shared by elites and the population. However, does this ‘belonging’ exist in Greater Eurasia? Does ‘Eurasia’ remain part of the geopolitical imagination, an artificial construct that will be easily forgotten? Second, how is the competition developing between the multiple concepts of Eurasia that are unraveling today? In addition to China’s Belt and Road Initiative (BRI), currently without a doubt the leading project on the ‘market of Eurasian ideas’, Russia, India, Japan, the European Union (EU) and the United States of America (US) have advanced their own initiatives for the Eurasian continent with different scope and objectives. International organizations such as the Asian Development Bank (ADB) are also involved in this process. In some cases, projects are relatively similar; in others, they are quite distinct. In some cases, complementarities between projects exist; other projects, however, were designed to compete with each other or were even initiated to counteract other connectivity projects. There are so many projects that one can hardly keep track of the various initiatives, and we are unaware of any systematic review of them. Should we expect these numerous connectivity projects to produce an integrated Eurasia? Or should we rather expect new boundaries to emerge, maybe across fault lines, which did not exist before? Third, and somewhat more pragmatically, how do interconnections between the individual regions that comprise the Eurasian continent actually work, and which institutional arrangements are feasible or are currently implemented?

Chapter 2 develops the idea of ‘meso-level’ regionalism at the continental level and discusses to what extent Greater Eurasia is a suitable space for it. Chapters 3 and 4 discuss the ‘building blocks’ of Greater Eurasia – Europe, the post-Soviet space, and East and Southeast Asia – as well as ‘regions of overlap,’ such as Central Asia and post-Soviet Central Europe. Chapter 5 is the central chapter of the book, as it surveys various connectivity projects in Greater Eurasia. Given the enormous scholarly attention the BRI has received, the authors offer a comparatively brief discussion of this project, though they do compare it to the initiatives promoted by Russia (the Greater Eurasian Partnership [GEP]), Japan (the Partnership for Quality Infrastructure [PQI]), the EU (the EU–Asia Connectivity Strategy), and India (the Connect Central Asia Policy [CCAP]). For completeness’ sake, the authors also discuss the New Silk Road Initiative (NSRI) promoted by the US, which seems to have been abandoned. Chapter 6 looks at the existing and potential links between individual Eurasian connectivity projects and regions (including through a discussion of the dialogue between the EAEU and the BRI, the EAEU and the EU, the 17+1 group initiated by China to engage the countries of Central and Eastern Europe [CCE], the Shanghai Cooperation Organization [SCO], and the Asia–Europe Meeting [ASEM]). The final chapter summarizes the main findings.