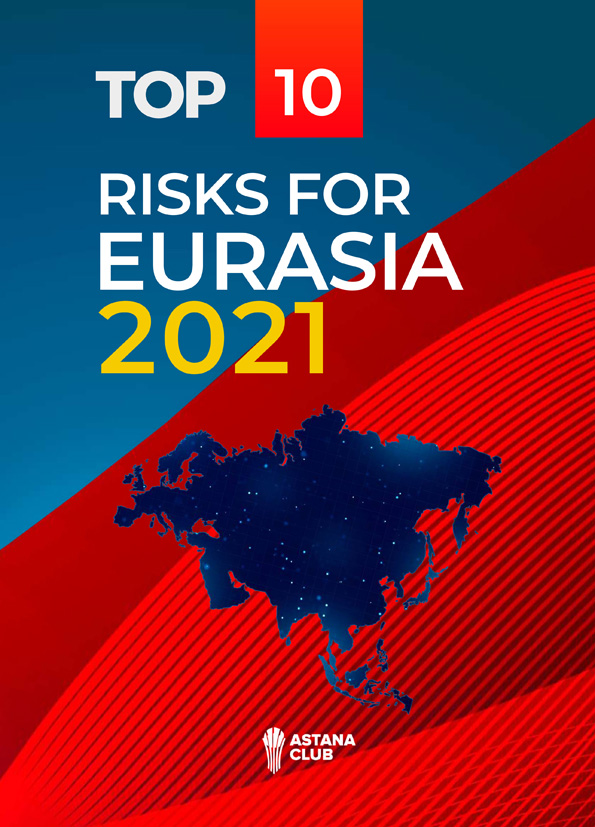 Astana Club, а geopolitical forum for Europe and Asia under the auspices of Nursultan Nazarbayev uniting distinguished experts and political figures, has issued the latest edition of the international rating “TOP-10 Risks for Eurasia in 2021”. This report summarizes the results of a project aimed at evaluating major threats for Eurasian macroregion.

The rating has been prepared by the Institute of World Economics and Politics (IWEP) under the Nursultan Nazarbayev Foundation and is based on a survey of more than 1200 respondents from 75 countries around the world and opinions of 40 reputable international experts in politics, economics, and international relations. The EDB and EFSD Chief Economist Evgeny Vinokurov contributed to the TOP-10 Risks for Eurasia in 2021 rating and shared his opinion on global risks.

The key risks for Eurasia in 2021 are as follows:

COVID-19 has become the hardest challenge for humanity. The world was unprepared for the pandemic and many mistakes were made in dealing with the crisis.

2. The recovery is under threat

According to estimates by the IMF, the global economy will be short $28 trillion over the next five years because of the coronavirus crisis. Many eyes are now focused on a speedy recovery of the world economy. However, slow recovery of global growth may be followed by a new recession.

In 2021, Eurasia will face a tougher geopolitical struggle between the U.S. and China. The change of administration in Washington will not lead to an easing of the contradictions between the two powers, but, on the contrary, will give the struggle a systemic nature.

At the beginning of 2020, Iran was already balancing on the brink of a direct armed conflict with the United States. Although the crisis has passed, the threat of war has not disappeared.

In 2021, Eurasia will face the risk of further misalignment of the strategic development courses of the U.S. and China in the geo-economic and technological spheres.

Thirty years after the end of the Cold War, the world stands on the threshold of a new unlimited nuclear arms race.

The coronavirus pandemic has exacerbated protest sentiments in societies around the world. Protest potential, which had been building up since the 2008–2009 global financial crisis, peaked as a result of quarantine and the imposition of severe restrictions.

Forced social isolation during the pandemic forced the digitalization of the global economy. Governments, businesses and the entire international community were forced to work remotely.

During the pandemic, digital technology became one of the key factors in curbing the spread of the coronavirus.

The historic decline in pollutant and greenhouse gas emissions during the pandemic was only the imputed “calm before the storm”.