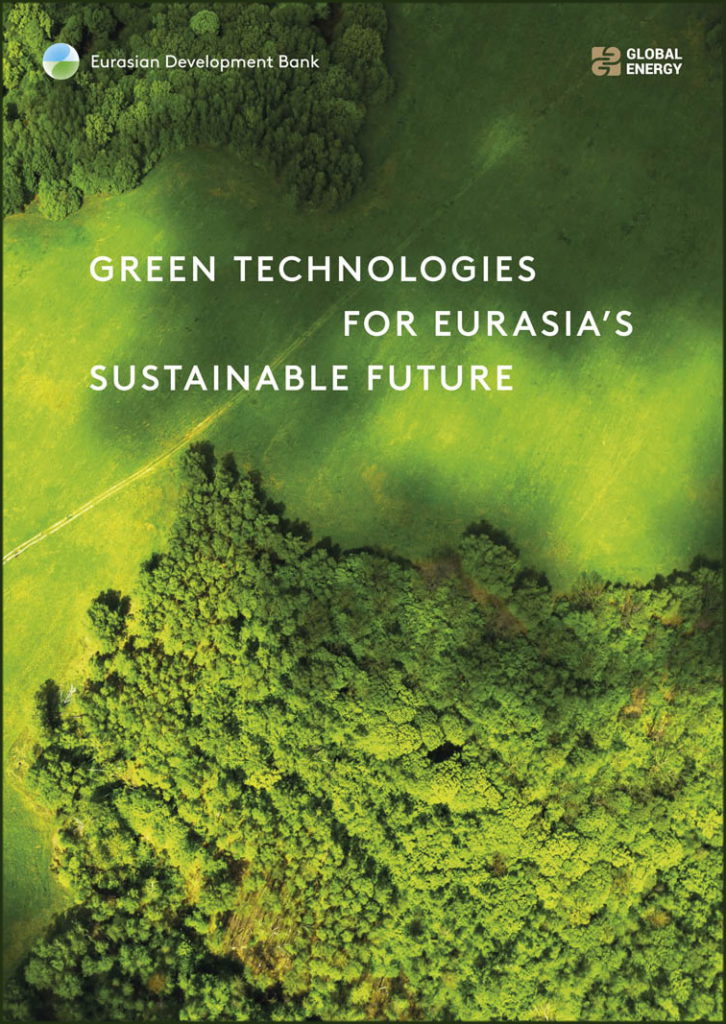 The report is prepared by the key international industry experts and young scholars. It contains the results of technical research aimed at solving today’s energy challenges and helping to reduce the carbon footprint in Eurasia. The focus is on hydrogen energy and energy storage systems, including those applied to the water and energy complex of Central Asia, offshore wind energy, hybrid materials for alternative energy technologies, CO2 capture, storage and transportation technologies. The report popularizes and supports research and development of green energy technologies, as well as promoting the expansion of cooperation in energy sector among the EAEU member states.

Evgeny Vinokurov. A Full-Fledged Energy Shift Is Ahead

The power-generating sector currently produces about 75% of global greenhouse gas emissions. Its conversion is the key to preventing negative climate change impact. Achieving carbon neutrality and reducing global carbon dioxide (CO2) emissions to zero by 2050 is an internationally recognised solution that might cap the global average temperature increase to about 1.5°C and thus prevent irreversible climate changes. Achieving such global goals would require a complete transformation of our ways of producing, accumulating, transporting, and consuming energy. Such a massive conversion does not mean a substitution of some energy sources with other ones – it still has to address the growing need of human civilisation for energy consumption. Economic growth requires energy. This is another reason why we believe that the next 30 years will be a time of massive transformation of world's energy sector.

A growing global political consensus with regard to the need for transformation of the energy sector on the basis of renewable energy sources and technologies that improve efficiency and energy conservation in order to achieve carbon neutrality, is encouraging considerable optimism about the progress the world can achieve. According to the International Renewable Energy Agency, in 2012–2020, the amount of new generating capacities based on renewable energy resources (RES) annually commissioned worldwide (except in 2014) exceeded the amount of all new generating capacities based on fossil fuel and nuclear power.

In 2020, the amount of new RES-based generating capacities reached a historical record of 260 GW, which is more than four times greater than new capacities based on traditional sources. During that year, Europe's RES-based energy production for the first time exceeded the amount generated by traditional thermal power plants, accounting for about 40% of total electricity production.

The realignment of the energy sector investment portfolio in favour of RES worldwide is explained by the significant potential and technical availability of these kinds of energy. Government investment decisions and the ensuing technological development have lowered the cost of electrical energy generation from renewable sources, which has become comparable to or below the cost of fossil fuel power generation in many OECD countries.

Innovative technological solutions are transforming the global energy system, paving the way to a decarbonised future. Technological and regulatory innovations are being implemented all over the world. Apart from the development of RES, we are seeing significant progress in electric vehicles, energy accumulators, digital technologies, and artificial intelligence. These technologies, which also constitute the basis for a structural shift, are contributing to the development of new trends in the sector, thereby contributing to increased investment in the sustainable use of rare-earth elements and other mineral resources, as well as investment in the circular economy. The development of smart grids helps to solve the problem of high volatility of energy production from renewables. Expanding the areas of RES deployment, including bioenergy and hydrogen, brings new solutions for transportation, construction, and industry.

The rapid worldwide spread of RES and other technological solutions in the energy sector is a promising trend for the future decarbonisation of the electricity sector. But is the overall outlook for its development so bright? Despite the shift of investment emphasis, the current state of many other indicators suggests that decarbonisation of the energy sector is lagging behind the momentum needed to reach the 1.5°C target by 2050. The International Renewable Energy Agency expects that implementation of the measures set forth by current state energy plans and targets can only help stabilise the level of global emissions, with a subsequent small decline by 2050. Thus, despite clear evidence of anthropogenic influence on climate change, broad support for the Paris Agreement and rapid development of environmentally clean, cost-effective, and sustainable energy sources, energy-related CO2 emissions have been increasing by an average of 1.3% annually from 2014 to 2019. Fossil fuels (coal, oil, and gas) remain strategically important as the primary energy source for all humanity. According to OPEC's World Oil Outlook 2020, they account for 72.5% of the global energy mix.

In recent years, worldwide progress in the development of RES and new technologies in the energy sector has been significant, but uneven. It has been concentrated mainly in large developed and rapidly developing countries, which have a significant weight in the global energy balance. In many other regions of the world, energy poverty is widespread and continues to hold back economic progress and social well-being. In 2020, Europe, the USA, and China accounted for the largest share of new renewable capacities, while Africa accounted for only 1% of global energy capacities. EAEU member states are also lagging behind the global trend. Kazakhstan is making the most serious efforts in the field of RES. The RES-based capacity installed in this region is about 70.7 GW or only 2.5% of world capacities, despite the significant potential and burning urgency of the issue of developing wide access to modern forms of energy to achieve carbon neutrality. There are objective reasons for this, in the form of huge reserves of fossil fuels and capital investments already made. However, as we have noted, on the horizon of 30 years, the Eurasian region will face a major energy transition.

The transformation of the global energy sector needed to achieve the goal of emissions reduction and carbon neutrality by 2050 requires further study. There is a lot of work to be done to make the long-term 30-year plans a reality, especially in view of significant differences between countries, inter alia, in terms of their investment and technological capabilities. Recent trends show that the lag between where we are and where we should be is widening.

The challenge of modernity, wherein mankind assumes the responsibility to accelerate the transition to clean energy technologies, presents an essential research field for scientists and specialists around the world, in various fields of energy or their intersection. Research and development centres in Russia, Kazakhstan, Kyrgyzstan, Tajikistan, Uzbekistan, and other Eurasian countries are continuing to develop bodies of knowledge and practical solutions to meet the challenges of safe and sustainable future energy development. Meanwhile, the most important topics, such as development of the water and energy complex in Central Asia, are cross-border in nature and underlie the sustainable development of the entire region.

In the long term, intensifying the development of the RES sector in the EAEU looks like the best solution, which will not only contribute to the technological development of the industry, but also increase the share of clean energy, which is an important task in the context of increased global efforts to combat climate change and the transition to a highly efficient and sustainable future. Key areas in this regard are: hydrogen energy; offshore wind energy; new materials for alternative energy sources; and CO2 capture, storage, and transportation technologies. These topics are analysed by leading dedicated experts in this report. Leading scientific teams and government organisations of the entire Eurasian region are paying special attention to all these significant areas of the energy sector today.

The report touches upon the industrial application of hydrogen energy, along with other kinds of energy, in the medium term. The use of hydrogen as an energy resource, the development of methods for hydrogen storage and transportation, discovering new ways to generate energy from hydrogen, as well as the applicable types of generating units and fuel cells, are a number of the problems whose solution would contribute not only to the development of hydrogen energy as a discipline, but also to meeting mankind’s steadily growing demand for renewable and clean energy. Given the opportunities at hand, the subject of hydrogen energy is particularly interesting for the Eurasian region.

Offshore wind power is another efficient and environmentally clean energy production technology, which plays a key role in the transition to RES; it has its own advantages, problems, and development prospects. Strong and steady offshore wind, vast territories for installation of extra-large and floating wind turbines for deeper ocean areas, contribute to generating large amounts of energy. On the other hand, there is expensive maintenance, a higher turbine failure rate compared to onshore wind power, and the high cost of generating this energy (currently decreasing). Technical improvement of equipment for offshore energy generation is subject to the development and implementation of a body of knowledge related to the construction of larger and taller wind turbines, wind farms and floating wind power generation platforms with less expensive maintenance over time, as well as finding solutions to the problems of hybrid wind energy systems, hydrogen production, and energy accumulation and storage systems.

Commercialisation of innovative developments and creation of effective ways to use energy is impossible without deployment of new stable materials for alternative energy sources, capable of ensuring a smooth and crisis-free transition to a carbon-free economy. Of particular interest are hybrid materials consisting of natural and synthetic components, indispensable in the development of highly efficient energy storage and transportation systems, including but not limited to hydrogen. A promising field of application of hybrid materials is related to the possibility of seawater desalination with the use of solar energy. From this perspective, the development of technologies that imitate natural processes is of the greatest interest.

Carbon neutrality will be approached, inter alia, by the scientific and engineering community constantly creating new technologies for CO2 capture and storage in order to achieve ambitious targets for reduction of carbon dioxide emissions. Although these are still in the development stage, they would open the door to decarbonisation of the energy sector.

You can also view the report Green Technologies for Eurasia’s Sustainable Future at the EDB website.