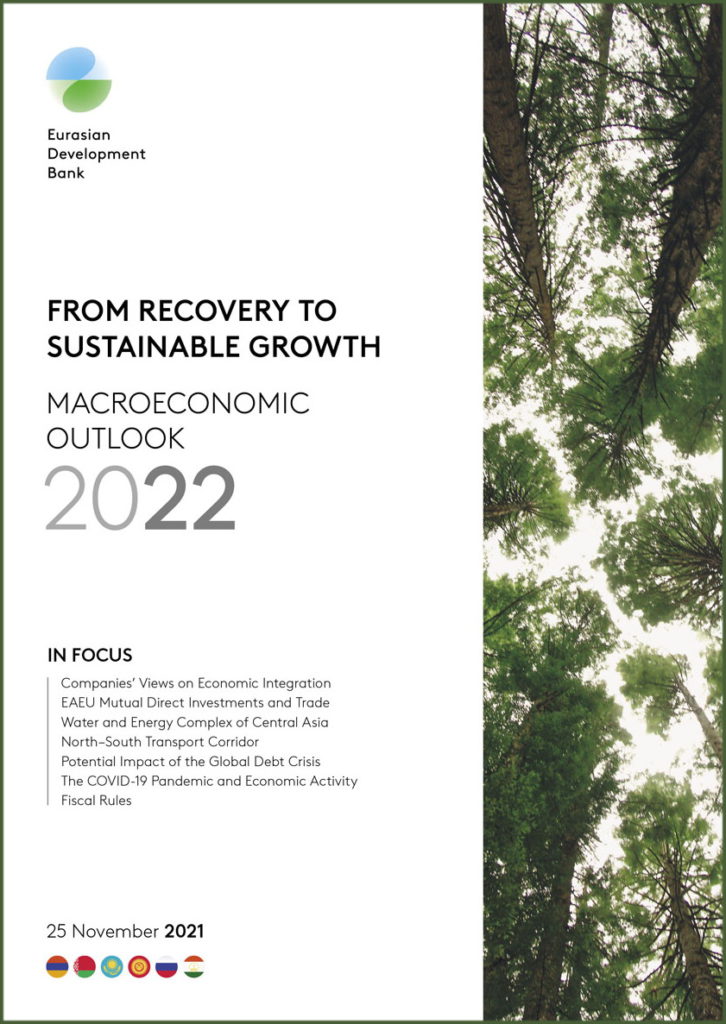 The Eurasian Development Bank has published its Macroeconomic Outlook for 2022. The analysis summarises economic developments in the Bank’s member states in 2021 and provides key macroeconomic projections for the region’s countries for 2022–2023.

EDB analysts note that the global economy has passed its peak of recovery this year and global GDP growth will gradually slow down. Global inflationary pressures will persist in 2022 but are expected to subside as global demand normalises and supply builds up. In the baseline scenario, the Bank’s analysts assumed that the Urals oil price would average USD 72.5 per barrel in 2022. Average annual inflation is projected to approximate 4% in the U.S. and 3% in the eurozone in 2022.

The report notes that economic activity in the EDB’s region of operations has returned to the pre-pandemic levels by the middle of the year and can exceed them by around 1% at the end of Q4 2021. The recovery of the EDB member economies this year was supported by the effects of fiscal and monetary easing in 2020, people and institutions adapting to the pandemic, expanding global demand, and soaring prices for the region’s key exports. The analysts point to an uneven recovery among the Bank’s countries of operations. The GDPs of Kazakhstan, Russia, Belarus, and Tajikistan exceed the pre-pandemic levels, while Armenia and Kyrgyzstan have not yet managed to achieve them. As the economies of Armenia and Kyrgyzstan declined more in the past year, they need more time to recover. GDP growth for the region as a whole is forecast at 4% for the year: 4.5% in Armenia, 2.1% in Belarus, 3.8% in Kazakhstan, 3.7% in Kyrgyzstan, 4.1% in Russia, and 7.9% in Tajikistan.

EDB analysts believe that economic activity in the Bank’s region of operations will gradually shift towards balanced rates once the active phase of the recovery is over. In such a context, fiscal stimuli are reduced and monetary conditions are tightened to prevent economies from overheating.

In the baseline scenario, the EDB member states’ GDP is projected to grow by 2.9% in 2022, after 4% in 2021. Economic growth will remain above the pre-pandemic rate, which was 2.3% in 2019. This will be facilitated by government measures to support investment, facilitate recovery in services, and boost oil production. We project Russia’s GDP to grow by 2.8% and Kazakhstan’s by 4.2% in 2022. High global energy prices and government development programmes will support economic activity in the region’s largest economies. In 2022, strong GDP growth is forecast in Armenia and Kyrgyzstan, at 4.8% and 4.5%, respectively. These economies will complete their recovery to the pre-pandemic levels. Tajikistan is expected to reach a steady economic growth of around 6–7% per annum. The baseline scenario for Belarus expects GDP growth of 0.7% in 2022.

EDB analysts also believe that monetary conditions in the Bank’s member states will have a disinflationary impact in 2022. Because of high inflation, key rates in the EDB member states could be raised by the end of 2021. In Russia and Kazakhstan the key rate is expected to be in the range of 8–8.5% and 9.75–10% at the end of this year, respectively. A long period of higher inflation is likely to require key interest rates to remain above their neutral levels for an extended period. Bank analysts suggest that the rate-cutting cycle in Russia and Kazakhstan could possibly start in 2022 as inflation slows down. The key rate in Russia could be lowered to around 7% and the base rate in Kazakhstan to 9.5–9.75% by the end of 2022. The transition to neutral levels is likely to end in 2023.

Evgeny Vinokurov, Chief Economist at the EDB and EFSD, considers asset inflation a powerful trend that has resulted from the pandemic and the economic authorities’ response to it:

“The crisis caused by COVID-19 has accelerated the transformation of the global economy. It has crystallised and dramatically amplified several megatrends that had emerged before but were not yet as visible. These include digitalisation, the transition to a green economy, and growing digital and social inequalities.

“Perhaps the only powerful trend that has really resulted from the pandemic and the economic authorities’ response to it is global asset inflation. The root cause of the surge in asset prices around the world was the massive fiscal and monetary injections in developed countries, which led to a rapid recovery in demand outstripping supply capacity. Supplies now take more time and cost more. We still believe that transport and logistics difficulties and the surge in commodity prices are temporary rather than structural changes. The global economy will show strength and flexibility and neutralise these problems. However, the latent force of COVID-related damages in the global economy, as well as the strong influence of monetary policies are such that it may take longer than expected to neutralise the inflationary impact of these factors. It would be realistic to assume that inflation in developed countries will be steadily higher than in the 2010s – not the 0–2% that the market was already used to in the 2010s, but perhaps 2–4%.

“Since the end of the last year, we have based our projections on an assumption that the environment in commodity markets would be favourable in 2021. The price environment will probably be good over the next few years. For the EDB’s region of operations, as a net exporter of commodities, the emerging situation has obvious benefits – export and budget revenues, as well as the attractiveness of the national currencies, are growing. This could be a good boost for the new investment cycle that is gaining momentum. However, we should continue to monitor the unwinding of the inflationary spiral. The threat of persistently high global inflation poses significant risks to the macroeconomic outlook for the Bank’s member states.”

The Macroeconomic Outlook is available on the EDB website.