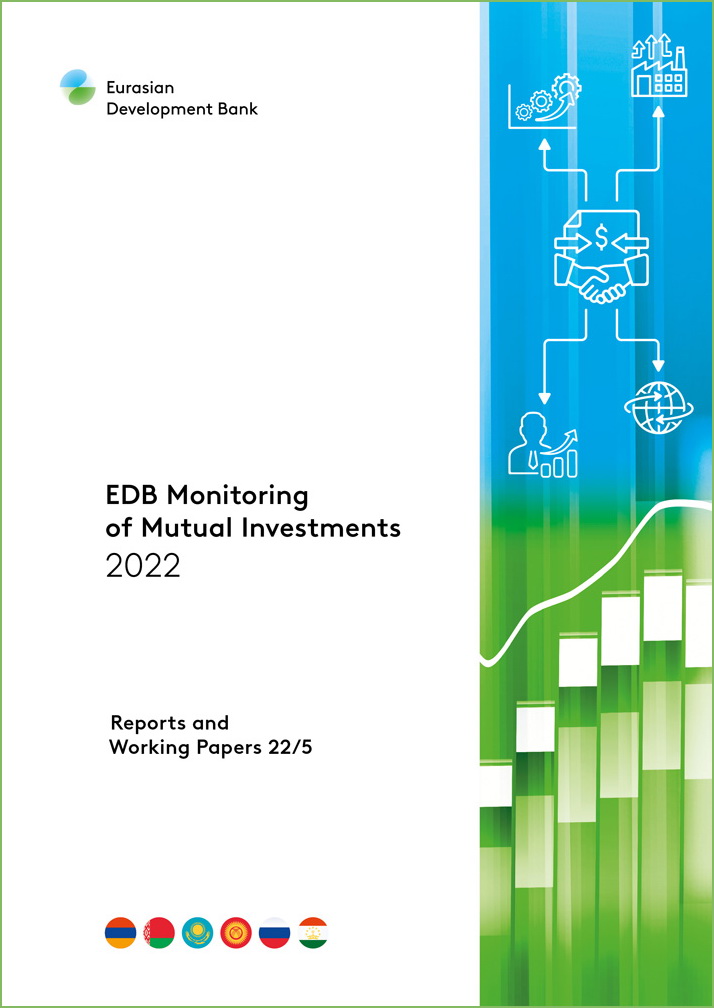 The Eurasian Development Bank continues its flagship analytical project to monitor mutual direct investments by CIS countries and Georgia. The EDB Monitoring of Mutual Investments (MMI) database has a bottom-up structure using a variety of open-source information, including corporate statements and other primary data. The data collection methodology allows for keeping track of investments made through offshore structures and this distinguishes the EDB MMI database from national agencies and international organisations’ statistics. A new element analysed in the project in 2022 is mutual investments of the CIS countries with China, Iran and the Arab states that have the potential to promote investment ties as well as trade and economic cooperation.

The figures for the first six months of 2022 are provisional. EDB researchers note that the active project base has shrunk, primarily as Russian investors withdrew from some of the region’s countries.

Russia is the major transboundary investor in the CIS. Its FDI accounted for 79.2% of total CIS mutual investment by mid-2022. Kazakhstan and Azerbaijan rank second and third, with shares of 9.5% and 8.4%, respectively.

Azerbaijan is an active investor in the region. Its outward FDI amounted to 6.7% of the country’s GDP (compared to 2% in Russia). This suggests that Azerbaijani companies have enhanced their investment capacity and are now expanding into other CIS markets.

Kazakhstan accounts for the largest share of inward mutual FDI, 24.3% as at the end of the first six months of 2022, followed by Uzbekistan (20.1%) and Belarus (12.6%). Changes in the investment structure compared to 2016 are significant. Ukraine’s share has declined threefold, from 12.0% to 4.0%. Uzbekistan saw the largest increase in inward investment, from 11.7% to 20.1%, as a result of the improved investment climate.

In addition to Kazakhstan, which accounted for 53% of Russia’s FDI in the EAEU and 30% of its FDI in the CIS as at mid-2022, Russian investors have been boosting investments in Uzbekistan and Azerbaijan. Over the past six years, Russian FDI in Uzbekistan has grown by a factor of 2.1 and in Azerbaijan 1.7.

The region’s leader in terms of investments is LUKOIL, which has doubled its presence in Azerbaijan’s Shah Deniz oil and gas project. Russia’s LUKOIL and Gazprom (including Gazprom Neft) account for more than 40% of the mutual FDI stock in the CIS.

The sectoral structure of mutual investments in the EAEU and CIS varies. While Extraction of Oil and Natural Gas accounts for 24% of the FDI stock in the CIS, it only ranks fourth in the EAEU where the top investment-recipient sector is Mining of Metal Ore (19.5% of EAEU mutual FDI). The Financial Services (12.4%) also accounts for a significant portion of mutual FDI by EAEU countries. In the first half of 2022, the leader in terms of mutual FDI stock in the banking sector was Sberbank, followed by VTB, Gazprombank and Alfa Bank.

Mutual investments of the CIS countries with, China, Iran and the most developed Arab states have the potential to grow. The expansion of Chinese capital into post-Soviet countries has been significant. Iranian businesses are likely to increase their presence in Eurasia, especially in the Caspian region. The Arab world is becoming increasingly attractive to CIS investors.

Mutual FDI between CIS and other countries, mid-2022, $ billions

China’s FDI stock in the twelve post-Soviet countries exceeded $67.5 billion as at mid-2022, including $12.5 billion invested in Russia. Chinese investors have become more active in Russia where China’s FDI stock grew by 27.4% from 2016 to 2022, while the increase for the EAEU overall was 8.1%.

Iran’s total FDI in CIS countries reached $1.8 billion, with Azerbaijan being the key recipient. Iran invests in Armenia, Belarus, Kazakhstan and Russia, as well as in Tajikistan (which is not an EAEU member). CIS investments in Iran have been small so far. The Arab countries receive more FDI from CIS countries, mainly Russia, than they invest in the region’s countries.

Evgeny Vinokurov, EDB Chief Economist, notes three key trends in EAEU countries’ mutual investments: “Firstly, a long-term trend is increased FDI in the greenfield projects. These have grown by a factor of 1.6 over the past six years, to 32%. Secondly, FDI by 100% private investors has increased by almost 1.3 times over the same period. These projects accounted for 56% of EAEU countries’ mutual investments as at mid-2022. We believe that the share of private companies in mutual FDI could grow further, given cuts in public companies’ transboundary investments. Thirdly, transboundary green investments have great potential, but their absolute amount is still insignificant.”

You can also view the report EDB Monitoring of Mutual Investments 2022 at the EDB website.