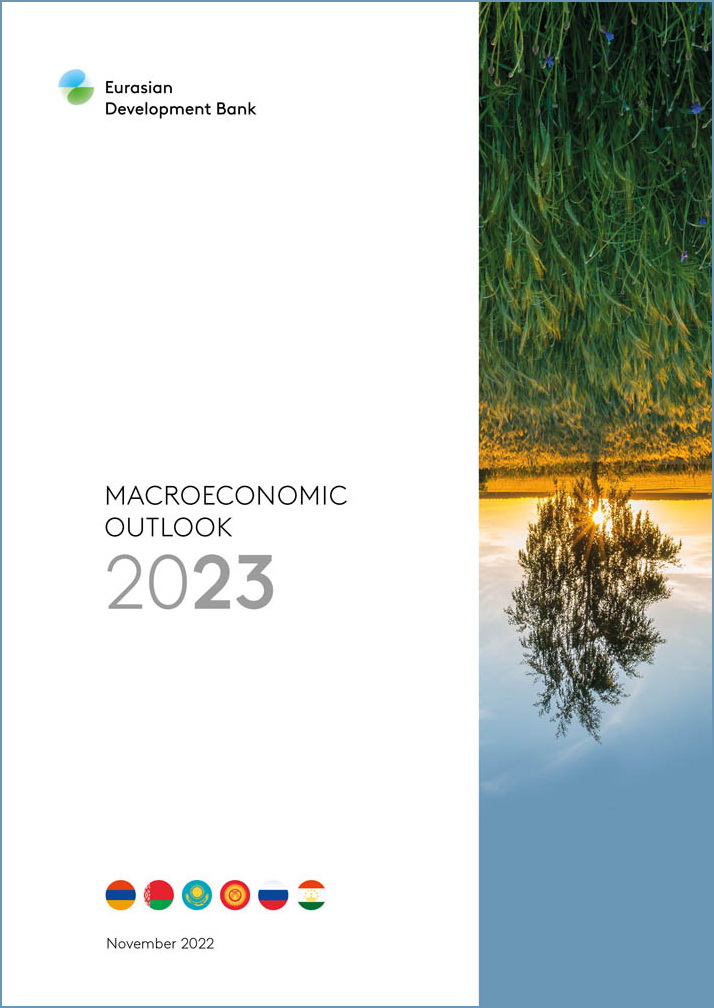 The Eurasian Development Bank has published its Macroeconomic Outlook for 2023. The analysis summarises economic developments in the Bank’s member states in 2022 and provides key macroeconomic projections for the region’s countries for 2023 and 2024.

EDB analysts have identified three main trends in the global economy. The first one is the record inflation not seen since the late 1970s. The second is a surge in central bank interest rates in both developed and developing countries. By November 2022, central bank interest rates in most developed countries had surpassed their 2010–2021 levels. The third is the weakening of global business activity. The world’s central banks are consciously sacrificing economic growth to prevent uncontrolled price increases in the future.

In 2022, economic developments in the EDB region were mixed. As at the end of the year, the region-wide economic downturn could reach 2.3%, mainly due to expected GDP declines in Russia and Belarus by 3% and 4.6%, respectively. The economies of Central Asia and Armenia will grow in 2022 thanks to increased domestic demand and high export prices. The EDB’s baseline scenario projects Armenia’s GDP to increase by 12.5%, Kazakhstan’s 2.8%, Kyrgyzstan’s 3.1%, and Tajikistan’s 7.5%.

The Eurasian economies’ external environment could deteriorate in 2023. Evgeny Vinokurov, Chief Economist at the EDB, notes the high probability of a recession in the eurozone and the U.S.: “Tightening financial conditions will cause a decline in developed countries’ GDP in 2023. This could be moderate – our baseline scenario expects GDP to fall by 0.3% in the U.S. and 0.6% in the eurozone. China is forecast to see growth below 4%. As the world’s three biggest economies slow down, global GDP growth will decline from 2.4% in 2022 to 1.5% in 2023. Weaker economic activity will start to curb inflation next year. We assume that signs of easing inflationary pressures will prompt developed countries’ central banks to end their monetary-policy-tightening cycle as early as the first half of 2023. We project the last Fed rate hike in December 2022 and the start of a rate cut cycle as early as Q2 2023. That said, we also assume that in the medium term the U.S. interest rate will be maintained around 3% and that the Fed will tolerate inflation above the current target of 2%.”

With a gradual adaptation to the sanctions, the economic downturn in Russia will slow to 2%, while Belarus is expected to see a recovery growth of 0.3%. Increased uncertainty, difficulties in the supply of investment and intermediate goods and limited access to advanced technology will continue to constrain business activity in Russia and Belarus in 2023. The Russian economy could resume growth in 2024 – by 1.5%.

Economic growth in Kazakhstan could accelerate to 4.2% in 2023. Government measures to support the economy, as well as the expansion of manufacturing capacity, will offset the negative impact of the external environment. High growth rates due to government support measures and increased domestic demand are expected in Armenia (4.2%), Kyrgyzstan (3.5%) and Tajikistan (6.5%).

EDB analysts forecast that inflation in the Bank’s region will slow to 6.2% at the end of 2023 from 13.1% in 2022. However, inflation will continue to remain above central and national bank targets. A rather high inflation in the global economy will continue to have a pro-inflationary impact. The restructuring of production and logistics chains in Russia and Belarus will exert pressure on prices. Yet, the impact of these factors will gradually diminish, and price rises will slow down considerably. In 2023, inflation is projected at 4.6% in Armenia, 8% in Belarus, 7.8% in Kazakhstan, 5.2% in Kyrgyzstan, 6% in Russia, and 6% in Tajikistan.

The Bank of Russia key rate is not expected to change significantly in 2023. However, the risk of another round of accelerated inflation remains significant amid the uncertain impact of the EU oil embargo on Russia’s foreign trade, heightened inflation expectations and the expected cessation of temporary disinflationary factors. Kazakhstan will focus its monetary policy on reducing pro-inflationary risks. EDB analysts forecast that Kazakhstan’s base rate will be around 14% at the end of 2023.

Bank analysts expect the Russian rouble to gradually weaken against the dollar in 2023. The current year’s rouble overvaluation will peter out as the foreign trade surplus shrinks. The year’s average exchange rate of the Russian rouble to the dollar is projected to be around 68.4 in 2023. Kazakhstan’s tenge will become more stable in 2023 and will be influenced more by fundamental factors. A moderate weakening of the tenge is expected amid lower export growth and increased imports.

You can also view the EDB Macroeconomic Outlook at the EDB website.