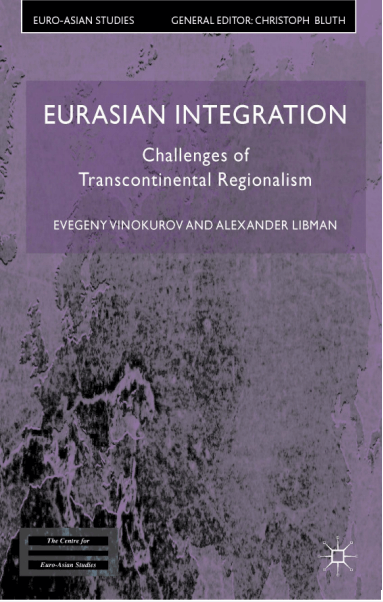 This book examines the major economic and political transitions currently taking place in the Eurasian continent. Vinokurov and Libman provide a detailed account of various aspects of Eurasian integration, looking at both its bright side (trade, investments and joint infrastructure) and dark side (trafficking humans and drugs and the spread of diseases) and linking it to waves of 'Eurasian exchanges' in the past. The authors explore how political reality adapts and shapes the changing networks of economic interconnections and delineate a concept of 'pragmatic Eurasianism' necessary for understanding these linkages and sharply contrasting to the heavily ideological views of Eurasia that often dominate the political and social discussions.

Two main perspectives are explored. One focuses on the political economy of Eurasian integration. Although economic interdependence between Eurasian countries is increasing, any formal or informal cross-border cooperation on the continent faces significant difficulties. The second perspective we take is more applied, concentrating on the specific industries in which trans-continental linkages exist and may exist in the future. It is argued that advancing towards continental Eurasian common markets, based on the development of common infrastructure, brings significant economic benefits.

“Vinokurov and Libman have pulled together a tremendous range of information and insight about Eurasian economic integration. Their eminently readable book tackles an important and timely topic, which lies at the heart of global economic and political transformation in the 21st century.”

Eurasia is a massive and diverse ‘supercontinent’ that stretches for 8232km from Cape Dezhnev in the east to Cabo da Roca in the west and 8505km from Cape Chelyuskin in the north to Cape Piai in the south. Home of the world’s most ancient civilizations, Eurasia currently accounts for two thirds of the world’s population and more than half of its GDP. The significance of Eurasia is likely to rise in the decades to come.

This book focuses on integration processes on the Eurasian continent, spanning Europe, Russia, Central and Eastern Asia. Most of the economic and political analysis of this area tends to cover only one region, for example, the European Union, or the post-Soviet area, or China, or Central Asia. Integration processes are seen as focusing concurrently on distinct regions of Eurasia. This monograph differentiates itself by the continental scope of its research, covering the fastest growing regions of the world and concentrating on the emerging economic and political linkages in Eurasia, which have not been studied in depth before. In a nutshell, it provides a coherent view of Eurasian continental integration.

In our view, Eurasian continental integration could become a key developmental force, driven by the integration of energy trade, non-energy trade and transport, capital and labour flows, tourism, the drug trade and epidemiological threats. A key question for the 21st century is whether or not the main continental powers will allow this integration – which represents a catch-up process in the historic, worldwide drive for globalization – to proceed smoothly and efficiently by cooperating to establish transport networks, open up access to natural and human resources and create institutions that support collective action in the pursuit of regional benefits and alleviation of regional disadvantages and that mediate between competing interests in a constructive manner. Or, conversely, will competition over resources, boundaries and allegiances, or disagreements over values and political systems drive deep wedges between countries and sub-regions across Eurasia, as in the past. This book explores the prospects and prerequisites for successful Eurasian integration and presents a comprehensive concept of Eurasian economic integration.

We explore two main perspectives in this book. One focuses on the political economy of Eurasian integration. Although economic interdependence between Eurasian countries is increasing, any formal or informal cross-border cooperation on the continent faces significant difficulties: for instance, the different concepts of regional (and global) international cooperation which the major players adhere to, or the impact of non- and semi-democracies. Some problems seem to represent features specific to Eurasian regionalism: for example, the need to establish cooperation between large economic areas or the inclination of individual governments to use open markets to pursue economic expansion abroad through sovereign wealth funds and state-owned corporations. We will debate the relative importance and the consequences of these problems and look at the optimal scale of integration and the role of supranational, national and sub-national actors in this process.

The second perspective we take is more applied and pragmatic, concentrating on the specific industries in which trans-continental linkages exist and may exist in the future. Our hypothesis is that advancing towards continental Eurasian common markets, based on the development of common infrastructure, brings significant economic benefits. We highlight common electric power markets, the development of transport corridors, and telecommunications networks, supported by the deepening industrial cooperation in aerospace, machine-building, and so on. Moreover, these sectors are fertile ground for the evolution of Eurasian multinationals, which we also discuss in detail. Once again, there is almost no literature covering these issues at present.

Although potentially vital for all countires involved, Eurasian integration has particular significance for Russia and Central Asia. These countries have a lot to gain from Eurasian integration that is constrained by the boundaries of the post-Soviet area. Therefore, our book argues in favour of open regionalism in Eurasia as an economically optimal component of post-Soviet integration – in fact, in the best-case scenario, this is the second stage of its development.

… We would like to draw your attention to Holding-Together Integration: 20 Years of Post-Soviet Integration (2012, Palgrave Macmillan), a sister monograph to this one, also co-authored by Evgeny Vinokurov and Alexander Libman.

...The book is structured to reflect the duality of the concept of Eurasian integration, investigating first the ‘bottom-up story’ then the ‘top-down story’, and finishing with a number of specific applications to various regions. Part I of the book elaborates the concept of Eurasian integration and provides a historical background to the waves of ‘Eurasian exchange’. Part II focuses on the discourse on emerging economic linkages, namely those in trade, capital, and labour flows. We then provide detailed accounts of the various emerging continental infrastructures which form the backbone of economic interaction (transportation, electric power and telecommunications). In Part IV, we discuss what we call ‘integration through mutual problems’. Common issues such as transborder ecology or the drug trade can actually become grounds for transborder cooperation or conflict. Most importantly, they are truly continental in scope. In Part V we provide theoretical analysis of the formal intergovernmental cooperation at state level. We also look at the sub-national aspects of Eurasian integration. In the last part of the monograph, we apply our hypotheses to the post-Soviet area and Central Asia, a region at the Eurasian crossroads.