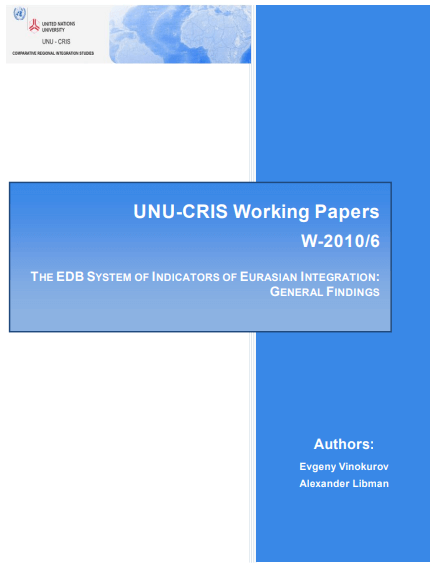 The EDB System of Indicators of Eurasian Integration: General Findings

Regional integration is a process of complex transformation characterised by the intensification of the relationships between countries. It produces new forms of governance that coexist with the traditional forms of state governmental institutions at the national level. Currently, regional integration is viewed as a multifactor process which includes, in addition to economic cooperation, the issues of politics, security, and social and cultural interaction. Trade and economic integration remain the foundation of the majority of the existing integration schemes. For almost two decades, regional cooperation and integration has remained one of the most talked about issues of economic policy of the post-Soviet countries. There are hundreds of initiatives and projects that aim for deepened cooperation between countries in the region. At the same time, to determine the effectiveness of integration strategies a comprehensive system is needed to monitor and assess the current processes of economic, political and social interaction between countries. This can be done with the help of a system of quantitative and qualitative indicators of regional integration. A large scale research project by the Eurasian Development Bank, completed by the end of 2009, led to the creation of such a system. It is intended that the EDB’s System of Indicators of Eurasian Integration (SIEI) should become an instrument to monitor and assess regional integration projects in the post-Soviet space (Vinokurov 2010).