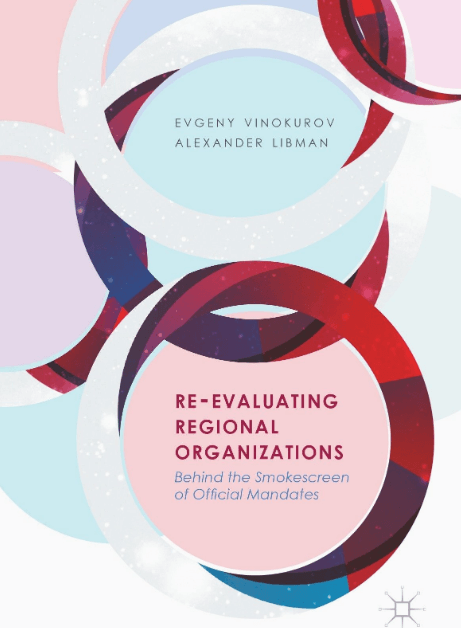 Re-Evaluating Regional Organizations: Behind the Smokescreen of Official Mandates

This book re-evaluates the regional organizations landscape and discusses how organizations with similar mandates can exercise strikingly different goals. Even economic organizations, which do not produce any outcomes in terms of economic cooperation, can be valuable for their members or individual stakeholders. The book's argument is supported by a combination of quantitative and qualitative methods. It employs a novel dataset of 60 regional organizations to establish correlations between members’ goals and their characteristics. More than a dozen of case studies in Latin America, Africa, Middle East, Southeast Asia, and post-Soviet Eurasia illustrate the theoretic arguments of how particular types of regional organizations come into existence and evolve. Finally, the book examines the remarkable resilience of regional organizations and considers the conditions under which the stakeholders are willing to abandon support.

Professor Harley Balzer, Georgetown University: Vinokurov and Libman provide an invaluable comparative analysis of the proliferating jumble of regional economic organizations around the globe. Combining theory with qualitative and quantitative data, the authors offer a thorough guidebook to one of the most important developments in international political economy and regionalism. Not surprisingly, the enormous number of regional organizations means they differ widely in size, purpose, capacity and outcomes. Coming from a country that has experienced repeated difficulties fostering effective regional organizations, Vinokurov and Libman challenge us to rethink assumptions about why nations join these groupings and how they evaluate the returns.

Gaspare Genna, Professor of Political Science at the University of Texas at El Paso: This book represents a highly detailed accounting of regional integration around the world. The authors ask important questions regarding regional organizations' goal setting and persistence. The reader is treated to an excellent review of theory and meticulous testing of hypotheses. The data-driven conclusions strongly add to our understanding of state cooperation.

Motivation for the book. Research plan.

In 1951, six European countries set up the European Coal and Steel Community (ECSC) – an international organization aimed at creating a common market for coal and steel. The ECSC’s ultimate contribution, however, extended beyond this particular sector. It became a first step toward European integration; its key institutions – the High Authority and the Common Assembly – served as the forerunners of the EU Commission and European Parliament. The European Coal and Steel Community was thus the embodiment of an ‘active’ organization. Some forty years later, in 1993, eleven countries of post-Soviet Eurasia agreed to create the Euro-Asian Association for Coal and Metals, again with the goal of establishing a common market in the area. However, unlike the ECSC, the EAACM did not assume any functions from the outset. Of its eleven members, only three (mainly Russia) provided funding to the regional organization, and on an irregular basis at that. In 2000, the organization’s activities were audited, uncovering serious financial violations. In 2003, member countries decided to disband the organization, and the Russian parliament ratified the decision in December 2005. The Euro-Asian Association for Coal and Metals’ condition during these 12 years is best described as a ‘coma’. The intentions of countries were extremely different from the beginning. While the hopes for the ECSC went beyond the purely economic cooperation – the organization should have functioned as a key tool preserving peace in Europe – the EAACM followed the logic of bureaucratic rent-seeking, and to some extent was created just to imitate the ECSC and thus the ‘legitimate’ European approach to regionalism.

We can analyze this diversity of outcomes in two ways. On the one hand, one can try to divide regional economic organizations according to their success. Some achieve significant progress in terms of regional integration. Others set less ambitious goals but manage to implement them. Finally, many ROs fail to implement their declared objectives or even demonstrate some tangible level of the integration. This book, however, pursues a different approach. We argue that organizations that do not produce any tangible outcomes in terms of their declared goals may still be valuable in the eyes of their member countries’ elites and bureaucrats. Thus, the proliferation of regional organizations in different parts of the world serves different purposes: what may appear to be an implementation gap is actually a reflection of the multitude of political and economic goals regional organizations can achieve. In some cases, regional organizations originally created to promote economic integration assume political or even security functions, making significant progress in these areas. Sometimes regional organizations are co-opted by bureaucracies – both the supranational and national civil servants responsible for regionalism – and used to extract rents. Occasionally, regional organizations are set up just as a pretext for high-level political meetings that would be difficult or costly to organize otherwise.

From these perspectives, our book builds and expands on New Regionalism,[ii] explicitly calling for an abandonment of EU-centrism in regional integration comparative studies and acknowledgement of the diverse approaches to regionalism. However, our analysis is simultaneously narrower and broader than that of New Regionalism. On the one hand, unlike New Regionalism literature, we only look at formal regional organizations (which are but one aspect of regional interconnections, which can also include informal alliances and coalitions and microlevel economic and social ties). On the other hand, we attempt to systematically examine the diverse objectives regional organizations can pursue, which, to our knowledge, has not yet been undertaken in the literature.

We highlight the role of four factors: First, history matters. A regional organization’s type can be determined by the existing economic and political connections between its members, and by how the organization has evolved in the past. Second, we consider the state of member countries’ economies, including both long-term economic development and short-term business cycles. In particular, we investigate how a regional organization’s type can be influenced by economic crises: do they make regional organizations focused on instrumental goals more likely to emerge? Or in this case do expressive goals become more important? Third, we consider power asymmetry among member states, as well as differing interests of the region’s dominant state and smaller countries. Fourth, the political regimes of member countries play an important role.

These factors have been highlighted in existing comparative regionalism literature, but it mainly uses them to explain why a particular design was chosen for a regional organization and how large the implementation gap is in terms of its objectives. Our goal is more ambitious: we consider how the variety of different objectives pursued by regional organizations affects them.

Structure of the book