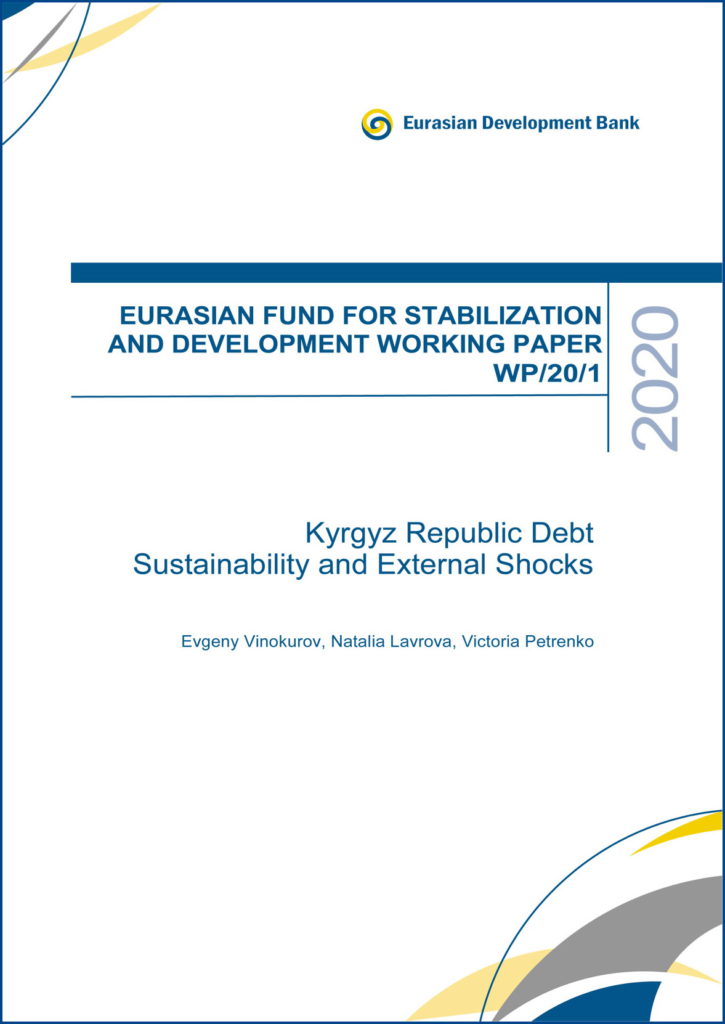 Nonetheless, the debt outlook in Kyrgyzstan remains fragile. First, the Kyrgyz economy has remained vulnerable to external shocks. The high share of foreign currency-denominated debt and dependence on commodity prices is seen as a notable threat to economic sustainability. Second, given the weakening of global economic activity in 2019, these adverse scenarios have a relatively high likelihood of materializing. Thus, the EFSD Chief Economist Group examined the resilience of the Kyrgyz debt under three stress-scenarios: (1) a global recession, (2) a financial crisis, and (3) the combination of a global recession and a financial crisis.

The analysis of external and public debt growth reveals high sensitivity of the Kyrgyz economy to a global slowdown, which we define as a recession in the global economy (only 1.5% and 0.5% growth in 2020 and 2021, respectively) and a decline in commodity prices. These adverse shocks, applied to the first year of simulations (2020), have a two-year effect, which implies a complete recovery in global growth and commodity prices only in 2022. The results of this simulation suggest that global recession is a key source of concern for the debt sustainability of Kyrgyzstan. Under this scenario, the debt level would increase significantly. We estimate that the external debt would peak at 91.9% of GDP in 2024 vs. 83.8% of GDP in 2018, and public debt would rise from 56.0% of GDP in 2018 to 65.8% of GDP in 2024. The response of external debt to the global recession shock is expected to arise primarily from the depreciation of the exchange rate and the deterioration in economic growth.

The impact of a financial shock on total debt appears to be much less pronounced, indicating that both public and external debt will be manageable. Under this scenario, the size of a financial shock expresses itself in a 30% spike of VIX in 2020, with the VIX returning to its previous level in 2021. Under this scenario, external debt would decline to 82.7% of GDP. However, it would remain higher than one in the baseline scenario. Public debt would increase from 56.0% of GDP in 2018 to 57.6% in 2024. The debt trajectory will be mainly associated with a deterioration of economic growth, reinforced by currency depreciation and worsened fiscal positions. All in all, financial shocks do not require a significant adjustment in economic policy in order to stabilize the debt level. It confirms that the financial system remains shallow and constrained by limited funding resources.

The scenario of an economic crisis, which combines both shocks (i.e. the combination of a global recession and a financial crisis), entails higher uncertainty and will have a more pronounced long-term impact, which will impede the country’s debt position. According to EFSD experts, this severe event will lead to 2% decline in GDP and a spike in the interest rate. The external debt is projected to increase to 100.8% of GDP, while the public debt may increase to 74% of GDP. The main channels of debt growth will stem from the Som depreciation, a decline in economic growth and a rise in external interest rates, contributing to the negative impact.

The empirical findings suggest that adverse external conditions can significantly raise the risk of debt distress. “Raising global and regional uncertainty may compel the authorities to focus more on budget stimulus, - suggests EFSD Chief Economist Evgeny Vinokurov. - However, a protracted debt accumulation in the framework of raising currency risks may significantly limit the fiscal space in adverse external conditions”. Given that and the result of stress-tests, cautious approach to managing external debt is recommended.

You can also view the report on the EFSD official website.