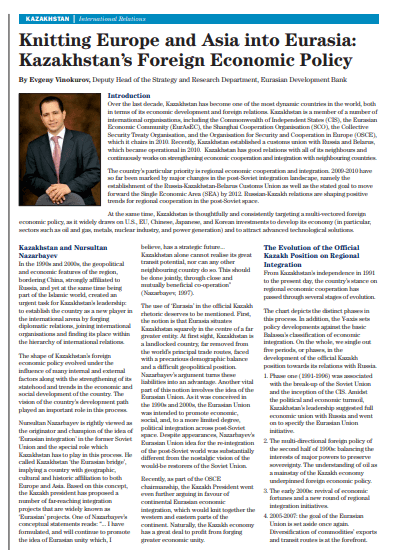 Over the last decade, Kazakhstan has become one of the most dynamic countries in the world, both in terms of its economic development and foreign relations. Kazakhstan is a member of a number of international organisations, including the Commonwealth of Independent States (CIS), the Eurasian Economic Community (EurAsEC), the Shanghai Cooperation Organisation (SCO), the Collective Security Treaty Organisation, and the Organisation for Security and Cooperation in Europe (OSCE), which it chairs in 2010. Recently, Kazakhstan established a customs union with Russia and Belarus, which became operational in 2010. Kazakhstan has good relations with all of its neighbours and continuously works on strengthening economic cooperation and integration with neighbouring countries. The country’s particular priority is regional economic cooperation and integration. 2009-2010 have so far been marked by major changes in the post-Soviet integration landscape, namely the establishment of the Russia-Kazakhstan-Belarus Customs Union as well as the stated goal to move forward the Single Economic Area (SEA) by 2012. Russian-Kazakh relations are shaping positive trends for regional cooperation in the post-Soviet space. At the same time, Kazakhstan is thoughtfully and consistently targeting a multi-vectored foreign economic policy, as it widely draws on U.S., EU, Chinese, Japanese, and Korean investments to develop its economy (in particular, sectors such as oil and gas, metals, nuclear industry, and power generation) and to attract advanced technological solutions.