Home › Eurasia › Economy of the Eurasian Continent › International Financial Centre in Moscow: What Would it Take?
← PrevNext → 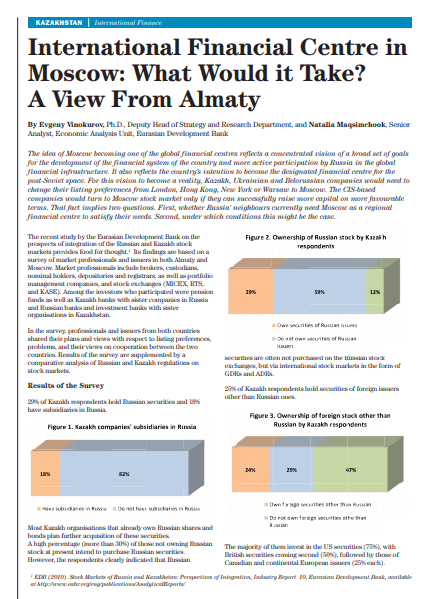 International Financial Centre in Moscow: What Would it Take?

The idea of Moscow becoming one of the global financial centres reflects a concentrated vision of a broad set of goals for the development of the financial system of the country and more active participation by Russia in the global financial infrastructure. It also reflects the country’s intention to become the designated financial centre for the post-Soviet space. For this vision to become a reality, Kazakh, Ukrainian and Belorussian companies would need to change their listing preferences from London, Hong Kong, New York or Warsaw to Moscow. The CIS-based companies would turn to Moscow stock market only if they can successfully raise more capital on more favourable terms. That fact implies two questions. First, whether Russia’ neighbours currently need Moscow as a regional financial centre to satisfy their needs. Second, under which conditions this might be the case.

The recent study by the Eurasian Development Bank on the prospects of integration of the Russian and Kazakh stock markets provides food for thought.1 Its findings are based on a survey of market professionals and issuers in both Almaty and Moscow. Market professionals include brokers, custodians, nominal holders, depositories and registrars, as well as portfolio management companies, and stock exchanges (MICEX, RTS, and KASE). Among the investors who participated were pension funds as well as Kazakh banks with sister companies in Russia and Russian banks and investment banks with sister organisations in Kazakhstan. In the survey, professionals and issuers from both countries shared their plans and views with respect to listing preferences, problems, and their views on cooperation between the two countries. Results of the survey are supplemented by a comparative analysis of Russian and Kazakh regulations on stock markets.