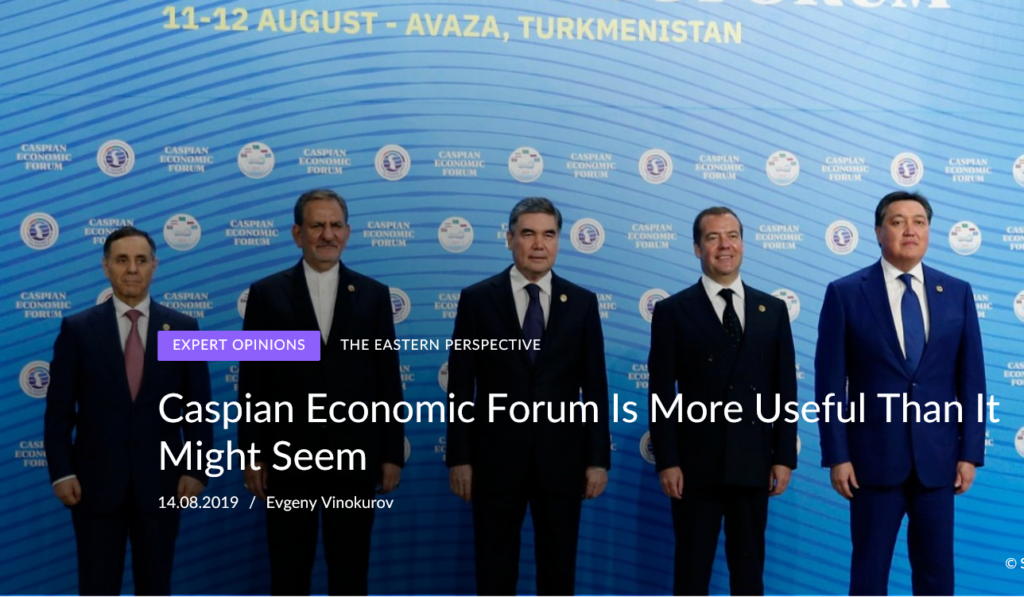 Caspian Economic Forum is More Useful Than It Might Seem

There are top-tier international forums which, by default, elicit high expectations from everyone; if there are no results, everybody is disappointed. On the other hand, some forums are met with scepticism from the very beginning. Directly or indirectly, such forums are accused of serving as a platform for empty political rhetoric and considered ill-suited for generating immediate, substantive results. However, over time, their value may turn out to be much greater than first expected. This could certainly be said of the Caspian Economic Forum.

The forum, which took place on August 11-12 in Awaza on the Caspian coast of Turkmenistan, brought together five very different states: Eurasian allies Russia and Kazakhstan, neutral Turkmenistan, Azerbaijan, which is shrewdly implementing a multi-vector policy, and, finally, Iran, which is struggling amid US economic sanctions. The countries vary significantly in terms of population, the size of their economies, and per capita income (Table 1).

Table 1. Population and GDP of the five Caspian countries, 2018

On August 11-12, about 1,500 participants gathered in Awaza, including delegations from 29 international organisations. The Caspian states were represented by their respective presidents and prime ministers. One of the central issues was the process of ratification of the Convention on the Legal Status of the Caspian Sea. This treaty is intended to regulate the rights and obligations of the countries with respect to their use of the Caspian Sea, including its waters, bottom, natural resources and Caspian airspace. The Convention was adopted last year after 22 years of negotiations. The significance of the Convention in ensuring the security of the region and promoting the unhindered cooperation between the Caspian states is difficult to overestimate. Three states of the region have already ratified it, but Russia and Iran have not done so yet. Russia is rectifying the situation: the Convention has been submitted for ratification to the State Duma. In Iran, the situation appears to be more complicated. According to the Convention, Iran's rightful territorial waters are less extensive than the portion of the sea it de facto controls, which has been a subject of criticism among the opposition. Moreover, Iran had planned to begin, together with Azerbaijan, the development of the Caspian's oil and gas resources. However, the US withdrawal from the nuclear deal with Tehran and the new sanctions against the Islamic Republic have made it extremely difficult to implement these plans.

In addition to this, a number of other issues were discussed: the creation of a regional logistics centre; the preparation of a plan to strengthen economic cooperation in the Caspian region with the goal of increasing regional trade; Turkmenistan’s ferry service with several Russian regions, etc.

Russia should be interested in this forum for a number of political and economic reasons. Politically, this is a useful platform for cooperation with so many different and difficult, but necessary partners of Russia. It should be noted that bilateral cooperation with Turkmenistan and Iran is often either difficult or insufficient. For Turkmenistan, holding this forum already means a move towards more openness. In this regard, the holding of the forum in Turkmenistan, talks with partner countries, as well as communication with international organisations (the OECD, international banks, international transport organisations) are already important in and of themselves.

Russia is one of the leading foreign trade partners of Turkmenistan. In the first half of 2019, trade between Russia and Turkmenistan amounted to $222 million, almost 49% more than the same period last year. Russia's trade surplus is positive, and the trend is growing. The bulk of Russian exports are machinery, equipment and vehicles (about 28% of total exports), food products (23%) and chemical products (22%). Export supplies from Russian metallurgists and chemists are on the rise. This is the first and most obvious Russian interest. Also, Russian oil and gas companies - Rosneft, Gazprom and Lukoil - are interested in cooperation with Turkmenistan in the development of oil and gas fields.

Of particular long-term interest - strategic interest in the true sense of the word - is the development of the Caspian transport corridors. We are talking about railways on the western coast of the Caspian Sea, through Azerbaijan to Iran, and on the eastern coast, through Kazakhstan and Turkmenistan to Iran. The eastern railway has already been built, but it is currently under-utilised. However, it has extremely significant future potential. Here's just one example: consider the current export delivery of Russian fertilizer to Iranian markets. First, it's loaded onto freight wagons and taken by rail to Novorossiysk; then it's loaded onto ships and transported through the Bosphorus and the Suez Canal to Iranian ports of the Persian Gulf; then they again are loaded onto freight wagons and delivered to the consumer. Now imagine the advantages of unimodal transportation, when the cargo is transported via rail from the place of production to the point as close to the consumer as possible: the transportation route is reduced by 60 percent and costs are cut in half or by two thirds. The advantages offered through the integration of international transport are driving cooperation among the Caspian littoral countries.

The next forum will be held in 2020 in Astrakhan. In 2019, the forum turned out to be little more than an intermediary step, but, in general, the platform is useful: the Caspian Forum cannot be replaced with anything else due to the geographical concentration of interests. It seems that the conditions are not enough to warrant a political alliance. In addition to the fact that the Caspian littoral states are very different, there are a number of institutional restrictions. At the same time, the economic agenda is quite pertinent; there are also substantial security questions. The key lies in focusing on the Caspian economy, transport, energy, and the expansion of trade and investment flows.