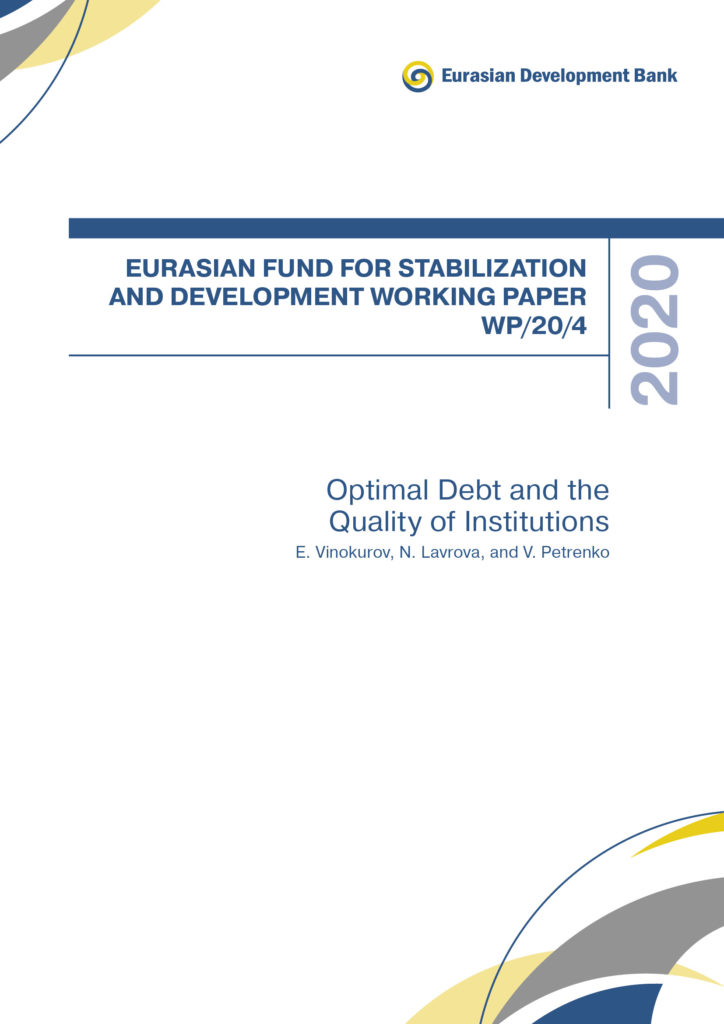 Optimal Debt and the Quality of Institutions

A new EFSD Working Paper WP/20/4 “Optimal Debt and the Quality of Institutions” has been published.

Amid the COVID-19 pandemic policymakers now face the dilemma of whether to stimulate infrastructure development by raising debt, which may reduce future flexibility, or to strengthen their fiscal positions. In order to shed light on this issue, the present study analysed an optimal debt level, taking into account countries’ institutional characteristics.

Russia and Kazakhstan are in a comfortable position of low public debt (below 20% of GDP), which does not exceed a 37-38% debt-to-GDP threshold. Concurrently, other EDB and EFSD countries have to be cautious about their debt positions given their uneven development of institutions. Nevertheless, our findings suggest that above a threshold value of 37–38% of GDP, growing public debt still features a very small positive effect on economic growth of Armenia, while the study does not indicate statistically significant negative effect for Belarus, the Kyrgyz Republic and Tajikistan.

We stress that the debt–growth nexus depends on a wide range of countries’ features, which should be considered carefully with regard to their policy implications. In developing economies, there is a number of other factors, which underline a possibility to raise debt without materially jeopardizing the country’s debt position, e.g. access to concessional financing. “In general, our research does not suggest that   countries have to reduce their actual debt levels to the estimated threshold, – stresses the EDB and EFSD Chief Economist Evgeny Vinokurov. – Rather, it implies that, above a certain debt level, the countries may need to access carefully whether an additional debt financing would stimulate their economic activity or rather impose unnecessary risks to their budget sustainability”.

You can also view the report on the EFSD website.

To access other EFSD publications, please use this link.