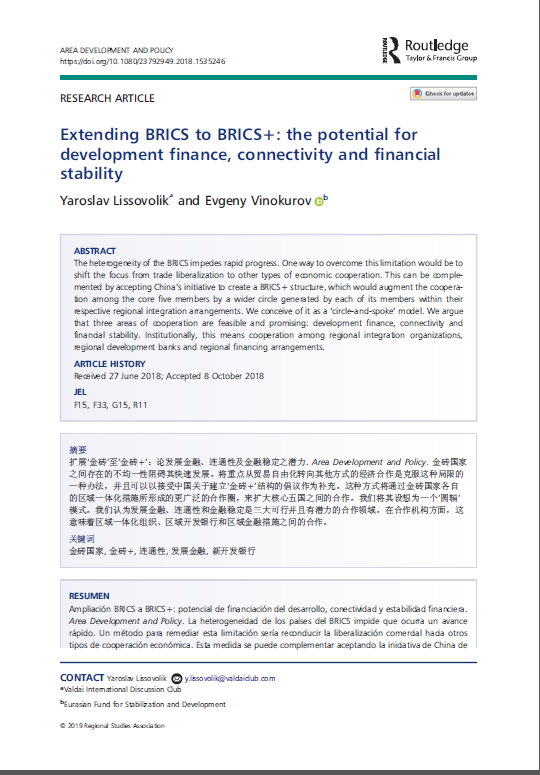 Over the last decade, the rise of emerging economies has given a powerful impulse to new international economic institutions. These nascent institutions should answer an explicit challenge to  better meet the needs of such countries as Brazil, Russia, India, China, and South Africa. . They should also rise to the task of making the current world economic order more just. With the waning influence of global economic integration (e.g., within the WTO and Bretton Woods institutions), the emerging economic powers could provide a renewed impetus towards economic integration, which would compensate for the lack of momentum coming from the ‘old platform’. The BRICS initiative is one result of this effort.

The heterogeneity of the BRICS impedes rapid progress, as is clear from the early development of this organization. One way to overcome the limitations in the BRICS as well as its lingering contradictions would be to shift the focus from trade liberalization to other types of economic cooperation among its member states, which would be flexible enough to match the organization’s structural features.

That kind of framework could be achieved through China’s initiative to create a BRICS+ circle. According to Chinese Foreign Minister Wang Yi, this will represent a new platform for South-South cooperation, through dialogue with other major developing countries or groups of developing countries to establish a more extensive partnership. ‘We will widen the circle of friends of the BRICS and turn it into the most influential platform for South-South cooperation in the world,’ Wang Yi has declared.

Discussion of the BRICS+ concept is very new, so academic literature is almost non-existent. Most academic research in this area has focused on the expansion of the BRICS core membership. Indeed, the term ‘BRICS+’, when used in academic discussions, primarily relates to expansion of the BRICS membership by adding several smaller economies. Most discussion has centred on whether the organization should be enlarged or should limit itself to cooperation among the core members and whether this cooperation should focus on trade issues or go further to finance, investment, and infrastructure.

An alternative interpretation of the BRICS+ concept is to expand the core five members by adding a wider circle of economic cooperation generated by each of its members. In this paper, we conceive of this as a ‘circle-and-spoke’ model, which is a new phenomenon in international economic relations.

This paper also looks into the specifics of BRICS+ cooperation on connectivity, development finance, and financial stability. The BRICS+ initiative is based on three key pillars:

This paper is organized as follows. First, we explore the structural features of the nascent BRICS+ as a new model in international economic relations. Then we focus on the potential of the BRICS+ for development finance, connectivity, and financial stability. This potential, in turn, materializes, first, through cooperation among regional development banks and funds, including the New Development Bank, and, second, through cooperation among regional financing arrangements (referred to as the BRICS CRA+). The concluding section looks at the rationale of the BRICS+ framework and its consequences for global economic architecture and the future of regionalism. It makes policy proposals for cooperation of the BRICS with partners within the BRICS+ framework, as well as with international economic organizations.