Home › Enclaves and Exclaves › Kaliningrad › Economic Prospects for Kaliningrad: Between EU Enlargement and Russia’s Integration into the World Economy
← PrevNext → 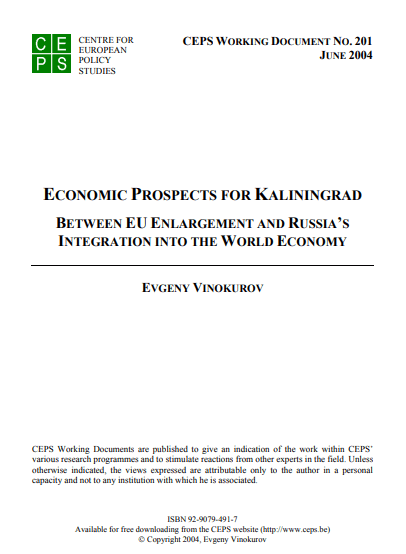 Economic Prospects for Kaliningrad: Between EU Enlargement and Russia’s Integration into the World Economy

The paper examines the state of Kaliningrad’s economy and trade. The economic crisis that took place in Russia in the 1990s had severe consequences for Kaliningrad, as old patterns of production and trade were disrupted. Since 1999, however, the regional economy has grown with impressive speed. Kaliningrad’s Special Economic Zone (SEZ) status has played a crucial role in determining its new patterns of production and trade specialization. The paper argues that the SEZ regime has made the region’s economic growth both faster but also vulnerable. The paper also looks at the potential impact of EU enlargement and Russia’s WTO accession. Here, Kaliningrad may be vulnerable to twin shocks. However, the impact is likely to be mixed, representing dangers to Kaliningrad in the short-run but providing it with new opportunities for economic development in the medium- and long-term. Various scenarios are reviewed that include factors such as the existence/abolition of the SEZ regime, Russia’s WTO accession, and an EU-Russian Common economic space. The paper concludes with an argument for an increased appreciation of Kaliningrad’s position by both Russia and the EU and for a careful approach to drafting a new SEZ regime that provides for a long transition period.